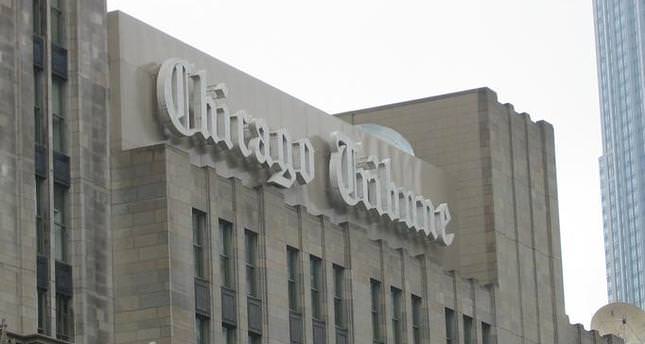 A curious audience filled the seats at the Chicago-based Niagara Foundation's Luncheon Forum to listen to a senior editor from the newspaper in February 2012. "After I was invited to speak at Niagara Foundation, to speak here this morning, I received a few emails from people asking me not to appear because of some troubling anti-free speech and free press trends in Turkey," vice president of the Chicago Tribune, Gerould Kern, said.

It had been almost a year since Turkish journalists Ahmet Şık and Nedim Şener's arrests by police officers and prosecutors allegedly linked with the Gülen Movement following the publishing of their books claiming the existence of a shadowy state organization headed by Fethullah Gülen, the leader of the Gülen Movement who lives in rural Pennsylvania. Gülen is also honorary president of the Niagara Foundation.

"I think the Niagara foundation is obviously an organization that is purposed to foster understanding and dialogue and communication," Kern said in a speech titled "The News Revolution: Implications for Journalism and Democracy," "… I know that it shares the [Chicago] Tribune's values about honesty and openness in government because the foundation honored our publisher Tony Hunter a couple years ago at the annual awards program." After a couple of months, Şık spoke to The New York Times saying that he had little doubt that "a secretive movement linked to a reclusive imam living in the United States" was behind his arrest. "If you touch them you get burned," he said.

The Gülen Movement is known for its world-wide lobbying activities that provide generous awards to leaders of any group that they want to access, including free trips to Turkey for state representatives and generous donations to politicians. The intense relations between the Chicago Tribune and the movement may indicate that the newspaper was also contacted as part of these efforts. Following Kern's speech at the Niagara Foundation in April 2012, the Chicago Tribune sent columnist John Kass and a photojournalist to Greece and Turkey. Kass wrote a series of articles explaining his experience in these countries. In his sixth article from Turkey, he talked about his meeting with Ecumenical Patriarch Bartholomew in Istanbul: "Bartholomew has been working [to build interfaith dialogue] with an Islamic Turkish theologian who now lives in Pennsylvania, is relatively unknown in America and yet has vast influence here. His name is Muhammed Fethullah Gülen." he wrote. "Gülen preaches interfaith acceptance and peace. His followers number in the millions, in Turkey and across the world. Bartholomew refers to his friend by the affectionate nickname of 'Hoja Effendi.' " Kass also visited Zaman daily, the main organization associated with the Gülen Movement, which is also Turkey's bestselling newspaper, during his trip. Zaman's sister publication, the English language Today's Zaman, published a story at the time using Kass's interview casting the Gülen Movement in a favorable light. Kass also gave a speech at the Niagara Foundation in October and Kern, the Chicago Tribune's editor-in-chief, visited the Chicago Math and Science Academy (CMSA), the oldest Gülen charter school in Chicago. He was interviewed for a promotional video for the school, welcoming the work the school had been doing.

The Chicago Tribune has always been very supportive of the CMSA's operator, the Concept Schools. It published three editorials in March 2013 praising the organization's charter schools for their success and having "a terrific record of running 27 schools across the Midwest." The school even dedicated a separate page on its website for the Chicago Tribune's "friendly" editorials. But everything has changed drastically for Concept Schools since then. Last July the FBI raided 19 offices of Concept Schools as part of an ongoing investigation related to "white collar crimes."

The Chicago Tribune last week republished a piece by Zaman daily's Editor-in-Chief Ekrem Dumanlı about his recent detention in Turkey. The op-ed, which originally appeared in the Washington Post, described the Gülen Movement as Turkey's "civil rights movement" and did not mention the alleged role Gülen played in the arrests of dozens of journalists in previous years. Dumanlı himself wrote many articles supporting the arrests at the time "What I would like to say is that not every journalist in this country is actually a journalist. Not every journalist chases stories. To some, the difference between journalism and being an informant can readily be dismissed," he wrote in an article titled "So the junta doesn't have an arm in the media?" published in Today's Zaman in March 2011. Kass also posted a link to Dumanli's video on his Facebook page. Kern did not return Daily Sabah's emails related to Gülen Movement lobbying of his publication. The Chicago Tribune's editorial page editor, Bruce Dold, refused to answer questions. He said: "This is nonsense. The Tribune works with all civic organizations in our community and operates with complete independence."