PM heads to Germany to call for action against Islamophobia 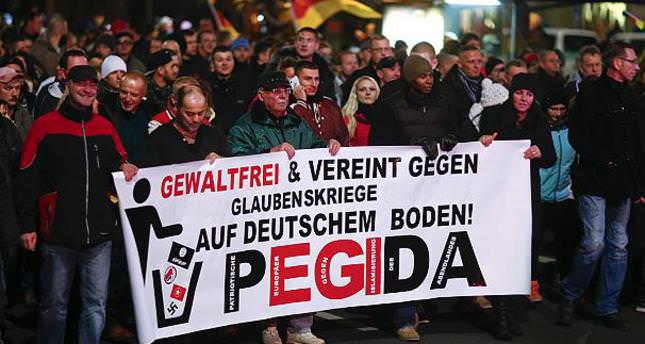 PM Davutoğlu heads to Germany, home away from home to nearly 3 million German Turks, to warn German officials of the growing threat of Islamophobia in Europe, which has grown with the anti-Islam PEGIDA movement’s rallies in the eastern city of Dresden

Amid increasing Islamophobia and racism in Germany where nearly 3 million German Turks reside, Prime Minister Ahmet Davutoğlu is expected to head to Germany upon the invitation of German Chancellor Angela Merkel on Jan. 11.

The visit is interpreted as a move to settle down increasing anger against Muslims and immigrants in Germany, which boiled over with the Patriotic Europeans Against the Islamization of the West (PEGIDA) demonstrations that started in Germany's eastern city of Dresden, which have been inflamed by the massacre at the French satirical magazine Charlie Hebdo on Wednesday in Paris. Davutoğlu is expected to refer to the EU's claims to defend freedom of belief, thought and human rights and to warn Germany and other EU countries of growing Islamophobia in Europe.

The Turkish government recently released a statement for German Turks saying that Turkish citizens in cities experiencing increased anti-Muslim and anti-immigrant demonstrations should not be provoked by extremist actions and hate speech.

"Mapping the Global Muslim Population: A Report on the Size and Distribution of the World's Muslim Population," a recent study by the Pew Research Center's Forum on Religion & Public Life, Muslims in Germany constitute the largest minority group with a population of 4,026,000, accounting for 5 percent of an overall population of 82 million.

A study issued on Thursday suggested that 57 percent of Germans regard Islam as a threat, signaling a rising fear of Muslims and immigrants. The number of Germans closely associated with far-right movements like PEGIDA has increased compared to figures released in 2012, according to the study conducted on Muslims in Germany in November 2014 by the Bertelsmann Foundation, a think tank in Germany active in political, social, economic, educational, cultural and health-related issues. Some 61 percent of non-Muslim Germans believe that Islam is not compatible with the German way of life and Western values. In 2012, it was only 52 percent who held that opinion while 85 percent of Germans responded that they are highly tolerant of other religions. However, this does not apply to Islam. Considering the negative perception of Islam, 24 percent of non-Muslim Germans said that Muslims should be barred from immigrating to Germany.

With efforts to settle down the increasing reaction against Muslims and immigrants in the country and defend the country's Muslim community, German Justice Minister Heiko Maas referred to the latest deadly attack on Charlie Hebdo and said that it had nothing to do with violence like the Paris attack. Describing the Charlie Hebdo killing as an attack on Islam, Maas said that the majority of Muslims in Germany consider the attack a betrayal of their beliefs.

Both Islamophobia and extremism are considered stimuli triggering one another by social experts. Non-Muslims witnessing the deadly attacks in some EU countries perpetrated by extremists drag into a reaction against Islam and its followers while Muslims, who are trying to adapt to Western lifestyles are exposed to racist and Islamophobic acts in return, have serious difficulties maintaining their identities in the countries to which they immigrate when they are marginalized and criminalized by the society. This two-sided situation morphed into a vicious circle affecting both Muslims and non-Muslims negatively in European countries.

Anti-Islam demonstrations by PEGIDA are expected to focus on the Charlie Hebdo massacre at their next rally, which are held every Monday in Dresden.

Amid the increasing support for PEGIDA, thousands gathered on the streets of Cologne on Monday, the same day PEGIDA held a rally in Dresden, to protest the anti-Islam demonstrations.

Many people from other cities took part in counter-demonstrations to condemn the widespread xenophobic demonstrations directed most viciously at the Muslim community, the largest immigrant community in Germany.