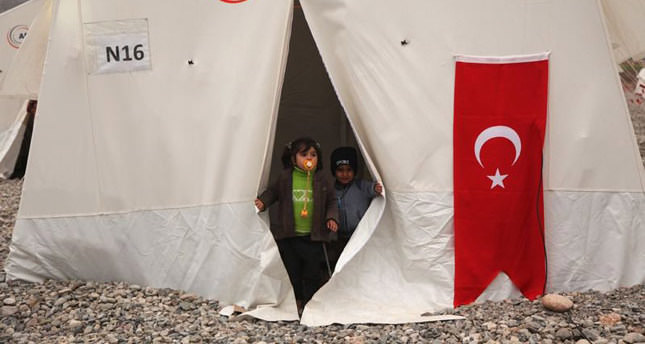 by Merve Aydoğan Jan 12, 2015 12:00 am
While the unrest in Syria maintains its current status, a recently released report by the Office of the United Nations High Commissioner for Refugees (UNHCR) revealed that Turkey, with 824,000 registered refugees, is sitting in fourth place on the list of countries with the highest number of refugees, mostly Syrians from the country's southern neighbor. The increased number of refugees has prompted various discussions and concerns among Turkish citizens at different levels of society. An inclusive report by the Center for Middle Eastern Strategic Studies (ORSAM) and the Turkish Economic and Social Studies Foundation (TESEV) regarding the "Effects of the Syrian Refugees on Turkey" was announced on Friday under the aegis of Turkey's state-run Disaster and Emergency Management Authority (AFAD).

During the meeting arranged by AFAD to announce and release details of the report on Syrian refugees in Turkey, ORSAM President Şaban Kardaş provided the guidelines of the report, with the President of AFAD Dr. Fuat Oktay stating that "the number of Syrian refugees in Turkey has surpassed 1.5 million as of today." The report prepared by Oytun Orhan, ORSAM Researcher, and Sabiha Senyücel Gündoğar, TESEV Foreign Policy Director, said that "the Syrian refugee situation in Turkey has become an integration and security issue with social, economic and political dimensions." There are a number of social effects expected from the wave of migration on Turkey and its citizens. According to the newly published report, "differences in cultures, languages and lifestyles make social integration more challenging."

Furthermore, regarding the social effects of the Syrian refugees residing in Turkey, the report provided comprehensive research on some border cities in Turkey. The report states that "there has been disturbance throughout bordering cities of Turkey due to changing demographics." There are numerous debates over Syrian refugees workers taking away job opportunities from locals, as they meet the demand in unskilled labor. In addition, the decrease in wages in areas with Syrian refugees plays an important role in job opportunities. Despite the problematic social issues regarding Syrian refugees living in Turkey, it is evident from the research that "both sides have developed some mechanisms that help keep social peace."

Additionally, the report on the "Effects of the Syrian Refugees on Turkey" discusses economic, political and security dimensions. The study reveals that "Syrian investors and merchants, who have good relations with the Middle East, contribute to commerce and investments in the region." Also, according to the report, the number of Syrian companies registered with the Gaziantep Chamber of Commerce increased from 60 to 209 by the end of October 2014. In regards to the political and security dimensions of the Syrian refugees, the paper states "Syrians living together in the ghettos is a challenge to the integration process." Thus, the all-inclusive report suggests there must a comprehensive policy, which includes the registration of Syrian refugees, building extra capacity in health and education, work permits and enabling more authority to local governments to arrange cooperation between central and local authorities. Increasing capacity and providing more money for municipalities, bringing groups of Syrian community leaders together, increasing border controls and enhancing public receptivity of the Syrians in Turkey, are also among the suggestions listed in the report for future policies for Syrian refugees.