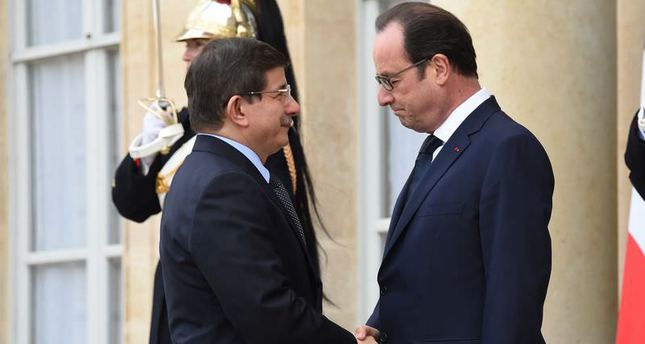 by Anadolu Agency Jan 12, 2015 12:00 am
Turkey expects the same sympathy shown towards Paris murders also for the recent wave of Islamophobic attacks on mosques in European countries such as Germany and Sweden, Turkish Prime Minister Ahmet Davutoğlu said on Sunday.

Davutoğlu made the remarks after attending Sunday's unity march at the Parisian square Place de la Republique along with over 55 world leaders to pay tribute to 17 victims of the attacks on French satirical magazine Charlie Hebdo and a supermarket.

Only one day after the Paris shootings, a mosque in Le Mans in northwestern France was attacked overnight with a bullet being fired into the building and several "training grenades" thrown into its courtyard.

"When it comes to human life, I would like to stress that we want to see the same respect from now on towards human dignity and human values regardless of people's ethnic, sectarian or religious backgrounds," Davutoğlu told a press conference late Sunday at the Turkish Embassy in Paris.

"As a country long suffered from terror, we will continue to raise our voice against acts of terror no matter where on the world they are staged," the Turkish PM said.

Davutoğlu maintained that for Turkey, terror has no color, race, sect or ethnicity.

"Our presence in here today was significant for the global message to be better understood, as it was a scene of unity and integrity for the European continent," he said.

The Turkish prime minister stressed that his attendance to the unity march also served as a guarantee for the Turkish people in France as well as other Muslims living in Europe.

"We have the right, more than ever, to expect the same sensitivity from Europe towards Islamophobic attacks and such acts against mosques," he said.

"From Andalusia to the Ottoman Empire, Islam is the most essential element of the European continent. Those who wish to arouse tension in Europe over an Islam-Christianity conflict are betraying the European culture," he added.

Davutoğlu also praised French President François Hollande's previous remarks when he said, "These fanatics have nothing to do with the Muslim faith," after the deadly attacks.

"His words constitute the best answer to those who aim at using this incident for certain Islamophobic activities to stage attacks against Muslims," added the Turkish premier.

He further argued that the resulting cultural tension in Europe would not have been that much if Turkey had already been a member of the European Union.

"Unfortunately, politicking over differences and contrasts has recently gained favor in Europe. It is the very source of the problem," he said.