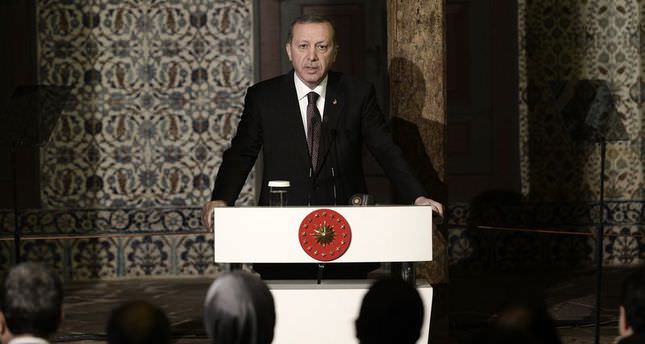 by Anadolu Agency Jan 12, 2015 12:00 am
Turkey's President Recep Tayyip Erdoğan on Monday pledged his support for the preservation of historical artifacts, saying that he would closely follow their restoration and revival both at home and abroad.

The president's remarks came during an opening ceremony for newly restored sections of the Topkapı Palace Museum in Istanbul.

"We are the representatives of a nation which has been broken off from its own history," said Erdoğan, adding that he believed historical sites like Topkapı Palace had an important function for the country's new generation.

Thanking those who contributed the restoration of the palace, Erdoğan said it was a responsibility to preserve the museum as it had a spiritual sense beyond being a historical piece.

"We have to carry this piece [the palace museum] to the future generations in its material and spiritual senses," said the president.

The Topkapı Palace Museum - Istanbul's tourist destination and once home to Ottoman sultans - is one of the world's largest, with its architectural structures, collections and an archive of 300,000 documents.

Erdoğan said that historical and cultural structures had not been meticulously preserved in the past and recalled his sensitivity over the protection and revival of historical pieces during his period as Turkey's prime minister.

He said many historical pieces [housed in Western countries' museums] had been taken out from this geography, adding: "We will closely monitor all efforts to restore and revive historical artifacts."

The six-hundred-year old palace, having served as a center of administrative, educational and artistic affairs of the Ottoman Empire, was turned into museum in 1924, years after the foundation of the Republic of Turkey.