Turkey is an indispensable part of Europe, says Latvian envoy 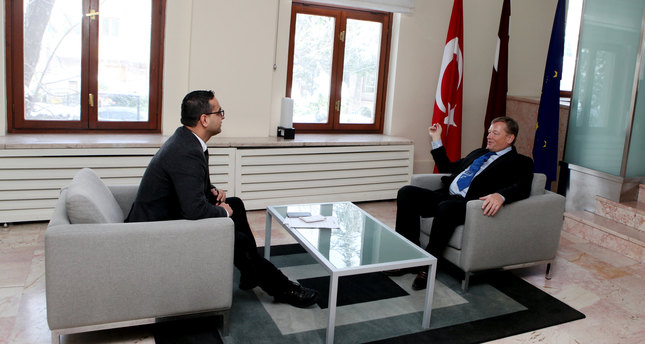 The absolute majority of the EU countries look forward to taking part in the Turkey-EU relationship, said the Latvian envoy to Turkey.

Latvia will hold the Presidency of the Council of the European Union in the first half of 2015 and the Presidency considered by European circles as an opportunity to define and change the country's role in the E.U. As Daily Sabah we spoke with the Latvian Ambassador in Turkey Mr. Atis Sjanīts and discussed the priorities of Latvian presidency, terrorist attack to Charlie Hebdo in Paris, Turkey's EU bid and bilateral relations.

DS: Latvia will hold the Presidency of the Council of the European Union in the first half of 2015. Could you elaborate on the priorities of the Latvian Presidency please?

We have three groups of priorities: First, the competitiveness in growth. It was a priority for previous Italian and Luxembourg Presidencies though. It's the most important item in the agenda of European Union because as you know, Eurozone has a low rate of growth. No more than 1% is expected for this year. What needs to be done for us is to increase the competitiveness in Europe and to complete the single market. Another issue is the energy. We are thinking about an energy union by dealing with it not only in national but also international level. The second priority is digital Europe, within common telecommunication market and data protection. And as the most important among the all, third priority is to attain a more engaged Europe. It is important for us because we are speaking about our direct neighbours and these are the Eastern partnership countries.

The Presidency of Latvia will hold the Eastern Partnership Summit, the Fifth Meeting of the Ministers of Education of the ASEM countries and the Conference of European standardization. The main event during our six-month presidency will be the Eastern Partnership Summit in 21-22 May at Riga. Countries in this partnership have the same importance for us and they have the same important for your country as well. Those include Azerbaijan, Armenia and Georgia in the Caucasus and Ukraine, Belarus, Moldova. I hope candidate countries to the EU will also be invited to the summit so decisions are taken by the whole union, namely including Turkey. The main subject here is to strengthen the ties between EU and those countries in Eastern Partnership. The same application is also for the Central Asian countries, which are seen as one of our priorities during our presidency. We would like to have a strong relationship with them for European Union as well. Those counties are also important for Turkey as a space to work on these issues.
It is also planned to ask the European Commission to support organization of the Digital Agenda Assembly in Riga as the industry in Latvia has made an excellent progress and in many areas is ahead of Europe. The event traditionally takes place in Brussels. During the Presidency Latvia is also planning to hold a high-level e-health summit and the UNESCO World Press Freedom Day event. Overall the Latvian Presidency will hold around 200 meetings.

DS: Last week we have witnessed tragic terrorist attack to Charlie Hebdo in Paris. What would you say on this crucial matter and shall the Latvian Presidency bring this important issue to EU agenda?

Once again I'd like to express our sincere condolences to the families of those innocent people who lost their lives and condemn the horrific terrorist attack in Paris. In our presidency, one of our concerns will be fighting against terrorism. We will hold a meeting, which will include interior ministers of all member countries to participate for in Riga, at the end of January. There are several other units in Presidential office in which these issues are discussed such as The Committee of Internal Security, The Committee for Terrorism Issues, and The Committee of Information Exchange in passenger data.

Turkey's role here is very important because it's geographical position and the prestige in the Muslim world. The statements by the President, Prime Minister and Foreign Minister condemning the attacks are not welcomed by France only but also by all European countries.

DS: Latvia has always been supportive on Turkey's EU bid. Shall we expect to open new negotiation chapters during the Latvian Presidency?

I may reassure you that the absolute majority of EU countries would like to have dynamics in Turkey-EU relationship. There is momentum forward which means that there are new chapters to open. There are talks about several chapters and EU Commissioner Johannes Hahn also affirmed during his visit to Ankara that he will do his best to open new chapters in Latvia's presidency and he repeated the same in Riga. Last week, the whole commission was in Riga and held a meeting with the Latvian government to discuss the priorities in Latvia's presidency. It is not only related to Latvian position but other 27 members agreeing on that. However absolute majority countries are very keenly interested in maintaining these dynamics. Despite some problems exist for some countries, absolute majority thinks that a supposedly frozen relationship with Turkey is out of EU's interests. Also one of the issues that we are good at is the visa liberalization issue and further progress will be witnessed in our presidency term. We will try to as fast as possible in eliminating the bureaucratic hurdles. Again it is something very practical and I would be very happy if we do not have bureaucratic procedures in our embassy for Turkish citizens.

Turkey is an indispensable part of Europe. If you look at the visits paid to Ankara in the last few months, you will get the impression that Ankara is becoming the diplomatic capital of the World. Visits of Putin, Pope Francis, Cameron, Dalia Grybauskaitė (Lithuanian President) constitutes a very impressive list for Turkey's international prestige. That's reason as to why we are trying to open new chapters and to maintain the cooperation with Turkey. We are among the most supporting countries for Turkey's EU Membership. Besides, our presidents have very good personal relationship. Otherwise, we would not have had three presidential visits in the last two years. When our president met with the ambassadors in Riga at the end of last December, speaking about his foreign visits, he mentioned his first visit was to Turkey and also Erdoğan paid visit to Latvia as his first visit to a European country after he was elected. Thus, I do not exaggerate while I am saying that this is an unprecedented level of our bilateral relations.

DS: Turkey and Latvia is also a member of the NATO, what are main areas of cooperation between two countries in the scope of NATO?

In that context the main project is that air force of Latvia and Baltic countries has no air combat capability, thus NATO maintains the defense of Latvian air space, with rotating detachments of four aircraft to Lithuania at four-monthly intervals. Turkey has a strong voice in NATO and from time-to-time it patrols Latvia and Baltic countries' airspace. Therefore, we are thankful to Turkey for doing that. This is the major project within the NATO.

DS: Regarding the academic debate on political atmosphere and the function of NATO in Eastern Europe after Ukraine crisis, how would you evaluate the claims that Iron Curtain is coming back?

Actually for small countries, as Latvia is taking our history not many people would know that this year is marking not only for our presidency but 90 years of our relationship. Fifty years of it was under Soviet occupation and people did not know much about Latvia accordingly. Considering this history, international organizations, either the NATO or EU are really important for us. Therefore we are very much insisted on not only being members of these organizations but also they are functioning properly including a stability and solidarity between member countries. That's why we are trying to be a reliable member of these organizations. These do not depend on the events in Ukraine or anywhere else. Having a big neighbour causes you to become cautious and to consider your security. This security of course, could be assured only such international relations.

DS: According to the figures, Turkey is the most preferred tourism destination for Latvian people. How would you evaluate this keen interest of the Latvian citizens travelling to Turkey as tourists?

This is a fact not only for Latvian people but also for people in many other countries. Turkey is a good place for sun and the sea. I am also surprised about good tourism products in Turkey, which have managed to attract people. Our people love the sun and Turkey is the closest place for the sun while they are leaving from the country such as in this winter. They are here for 3-4 months and sun and the sea is very much preferred. People in the Northern and Eastern European countries will become Turkey's one of biggest markets in future. Speaking about the languages, this is also very important for Turkey.

DS: Despite geographical distance between our countries there are two Turkology departments, which were established in 2004 and 2011, under Latvia University and the Latvia Cultural Academy respectively. What are the motives behind the interest on Turkey and the Turkish culture?

DS: Trade volume between our countries is slightly less than $ 0,5 billion. What are your thoughts and plans regarding to establish further economic relations?

Actually that's a reasonable figure for a country with a two million population. There are possibilities to develop, of course. We have signed the protocol of JETCO Agreement (Joint Economic and Trade Commission) during the last presidential visit of Latvia in the last spring. We are planning it will come together in the next few months. It will give a boost to reciprocal trade and the largest company in Latvia is also presented in Turkey. This company produces wood as the largest export product of Latvia thanks to forests, which cover half of the Latvian territory. Pharmacy is another area for trade. Also livestock products are another area for Latvia to export because our country is very green and it is possible to produce milk and meat. Turkey is a great market for us and for everybody. I should also remind that three official presidential visits between two countries happened in the last two years. Those visits happened in both directions and this was an unprecedented level for bilateral relations in 90 years of period.