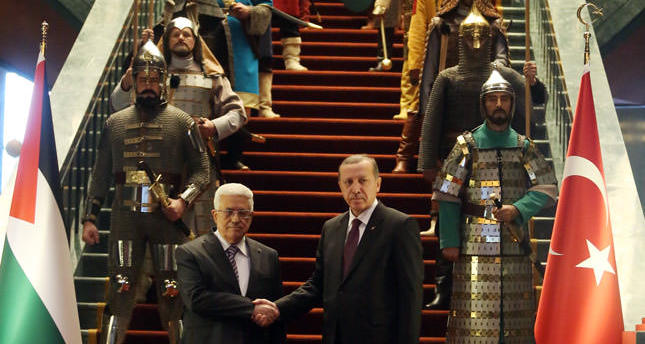 by Sena Alkan Jan 13, 2015 12:00 am
PalestInIan Authority (PA) President Mahmoud Abbas paid an official visit to Turkey's capital Ankara on Monday upon the invitation of President Recep Tayyip Erdoğan, to discuss the repercussions of the failure of the U.N. Security Council (UNSC) to adopt a draft resolution setting a deadline to end Israel's occupation of Palestinian territories, issues related to Palestinian statehood and the reconstruction of war-torn Gaza following the Israeli offensive last year. For the first time, Erdoğan welcomed Abbas with head of state protocol, and both leaders were expected to give a joint press conference following their meeting at the Presidential Palace after Daily Sabah went to press. The leaders are expected to discuss bilateral ties and the humanitarian and development aid extended by Turkey to Palestine.

Turkish soldiers in military uniform representing 16 Turkish states appeared at the welcoming ceremony, while due to the harsh weather conditions, the cavaliers did not make an appearance. Yesterday was the first time Erdoğan welcomed Abbas in accordance with the protocol designated for head of states. Both leaders are expected to give a joint press conference following their meeting at the Presidential Palace after Daily Sabah went to press.

The leaders are expected to bring bilateral ties between Palestine and Turkey to the table, discuss the humanitarian and development aid extended by Turkey to Palestine, and the reconstruction of the war-battered Gaza Strip following an Israeli offensive last summer that left more than 2,160 Palestinians dead, many of them civilians, and which destroyed thousands of homes. Regional issues are also expected to be at the top of the agenda. Abbas's visit is considered an indicator of the strong relations between the two countries and Turkey's full support of Palestine. Ankara has decided to step up its support and aid to Palestine in terms of development and infrastructure in 2015. As part of Turkey's goal to stand with Palestine in international platforms, Turkey allocated a budget of around $200 million solely to rebuild the war-battered Gaza Strip. In November, with an attempt to heal the wounds in Gaza, the Turkish state-run Turkish International Cooperation and Development Agency (TİKA) paid a visit to Gaza and inaugurated TİKA's projects that aims to lend a helping hand to blockade-hit Palestinians. Israel's 51-day war, which came to an end on Aug. 26, left 9,000 homes in Gaza in total ruin and 8,000 others partially destroyed.

As part of the efforts to rebuild the city, TİKA launched a project to build 1,000 homes to shelter war-hit Gazans to help Palestinian efforts to rebuild the city. During Israel's last offensive, 15,671 housing units in the Gaza Strip were damaged, including 2,276 that were totally destroyed, according to official Palestinian figures. More than 2,160 Gazans were killed and some 11,000 injured during the seven weeks of unrelenting Israeli strikes in July and August. The Israeli offensive finally ended on Aug. 26 with the announcement of an indefinite cease-fire agreement. Following the offensive, Turkey received some injured Gazans who were in need of medical treatment, since they could not be treated in Gaza due to the lack of electricity. Two weeks ago, the UNSC rejected an Arab-backed Palestinian draft resolution that had set 2017 as the deadline for Israel's complete withdrawal from the occupied West Bank. The bill failed to win the nine votes needed to pass, with the U.S. – Israel's longstanding, veto-wielding ally – voting against the proposal.

The PA has yet to formally announce Abbas's visit after a similar visit by Khaled Meshaal, the Qatar-based leader of Hamas. Meshaal's visit to Turkey on Dec. 25 caught the media off guard as it was not announced publicly. Two days after his arrival, Prime Minister Ahmet Davutoğlu and Meshaal attended the Justice and Development Party (AK Party) annual meeting in the prime minister's hometown of Konya together. Praising Davutoğlu and Erdoğan in a short speech he gave during the surprise visit, Meshaal was greeted by Konya residents and said that a strong Turkey means a strong Palestine and a strong Jerusalem.