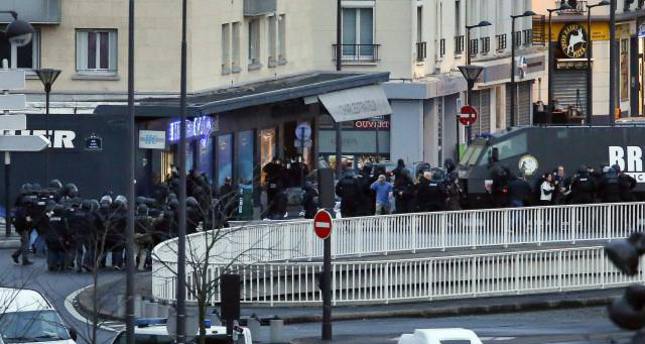 After failing to apprehend militants deported by Turkey last year, French intelligence this time did not need the warnings of its Turkish counterparts when the widow of a Paris terror suspect landed in Istanbul early January to cross into Syria to join ISIS

French intelligence has been highly criticized after its failure to prevent the terror attacks in Paris. Since the self-proclaimed Islamic State of Iraq and al-Sham (ISIS) captured the city of Mosul in Iraq last summer, Turkish leaders have called for broader cooperation to fight ISIS in the region and prevent militants from joining the group, which also threatens the West.

On every possible occasion, including the NATO summit in Wales and the G20 summit in Australia, Turkish leaders said international cooperation and intelligence sharing is vital to combat the influx of foreign fighters into ISIS-held regions in Syria and Iraq.

French intelligence had been at the center of debates after Turkish officials announced that Hayat Boumeddiene, the 26-year-old wanted partner of the gunman who killed four people and held more hostages in a Paris kosher supermarket and was killed by police after three days of high tensions in France, arrived in Turkey before the killings and is most likely in Syria now.

She reportedly arrived in Turkey on January 2 and stayed in Istanbul's Kadıköy district for two days before traveling to southern Turkey to cross into war-torn Syria. During her stay, the National Intelligence Organization (MİT) tracked her moves and sought intelligence from their French counterparts, a request that the French authorities ignored. According to reports, Boumeddiene left Turkey on January 8 and the GSM signal on her cellphone was last received from a region in northern Syria. The MİT immediately reported her crossing into Syria to France.

According to data given by Interior Minister Efkan Ala during the annual Ambassadors' Conference in the capital Ankara, Turkey issued a ban on 7,833 people from entering Turkey and has deported around 1,056 people. However, due to a lack of cooperation or not responding to Turkey's warnings regarding its citizens, France is now accused of not doing enough to combat terrorism, which became a large domestic issue in its lands, on the global level.

The issue of Boumeddiene was not the first incident. Previously in November, Turkish officials arrested a French national for the second time in the southeastern province of Şanlıurfa on suspicion of attempting to join ISIS in Syria. The suspect was arrested in September for the same reason and deported to France.

Furthermore, in September three men suspected of links with ISIS in Syria who were deported by Turkey were not arrested upon their return to France as French police waited for them at Paris's Orly Airport instead of the one in Marseille. French media bitterly criticized the French Interior Ministry over the serious security breach as the ministry had earlier released a statement that the three men were arrested upon their return to France. Further problems were avoided as the men handed themselves over to the police on Wednesday. French Defense Minister Jean-Yves Le Drian accused the electronic passport system that should have alerted the police about the suspects at Marseille. The scandal erupted in a period when France and its citizens have been threatened by ISIS militants due to the active French role in the fight against the militant group.

According to figures, some 3,000 Europeans have joined ISIS in Syria and Iraq and the terrorist organization has plenty of sympathizers in Europe. Thanks to the rise of far-right parties and worrisome Islamophobia, the terrorist organization started being more influential in some Western countries. Turkey started raising its voice more strongly than ever for France and other European countries to prevent possible extremists coming to Turkey and to provide details of suspected militants from entering the country.

High Representative of the EU for Foreign Affairs and Security Policy Federica Mogherini, Enlargement Commissioner Johannes Hahn and Humanitarian Aid Commissioner Christos Stylianides will travel to Turkey on Monday and Tuesday in one of the highest profile EU visits in years to hold talks over the ways to cooperate more closely in the fight against the ISIS. EU officials want to talk about the need for closer cooperation in the fight against ISIS militants and other militant groups and efforts to cut off their funding and halt the flow of foreign fighters.

Thousands of Europeans have gone to fight in Syria with ISIS or other groups and Turkey is a key transit point. Ankara has said that EU governments should be doing more to stop would-be fighters travelling to the region and urged Western countries and the U.N. for a comprehensive strategy to combat the flow of foreign fighters joining ISIS.