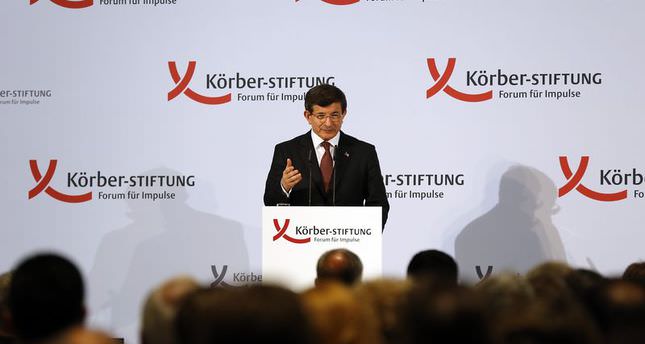 by Anadolu Agency Jan 13, 2015 12:00 am
Turkish PM Ahmet Davutoğlu has demanded reform in the UN system, saying that the current measures are incapable of preventing the serious crimes of brutal regimes.

"All types of crimes against humanity are committed in Syria," Davutoğlu said during a speech at the Berlin-based Koerber Foundation think-tank. "This is an indication of the inability of the UN system and also a clear picture that we need to reform the international system and international organizations."

The UN Security Council has been unable to act on the Syrian issue since the crisis began in March 2011, as China and Russia have blocked any decision that would undermine the power of the Assad regime.

Davutoğlu said that the international political order needs a new framework to ease tensions and bring solutions to conflicts around the world.

Turkey will continue to follow a foreign policy approach that is based on values, including the protection of human rights, refugees, democracy and helping the least developed countries, he also said.

"We will never change our position. Many people may criticize us, but we will keep an open door policy for the Syrian people," Davutoğlu added.

An estimated 1.6 million Syrian refugees are currently being sheltered in camps across Turkey. The Turkish government has delivered $5 billion worth of aid to Syrian refugees so far.

Davutoğlu said he is determined to work toward democracy and stability in the Middle East but ruled out any dialogue with the Assad regime.

"We will never accept the legitimacy of a regime that has killed its citizens," he added.

The Turkish PM also said that Turkey will continue to work closely with Germany to help ease tensions in the Middle East and to promote democracy and stability.

"Turkey and Germany are two stabilizing forces who need to work together," Davutoğlu said.

He also said that, during his visit to Berlin, the Turkish and German governments agreed to form a High Level Strategic Cooperation Council, to deepen their cooperation in various fields, including politics, economy and trade.

Davutoğlu paid his first official visit as PM to Germany on Monday after assuming office in August 2014.

Germany has the largest Turkish diaspora abroad, with an estimated three million people of Turkish origin living in the country.