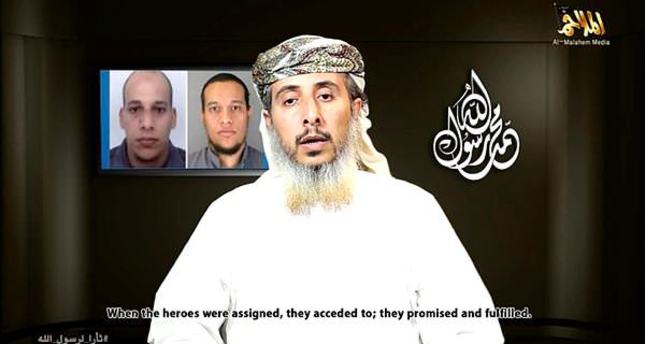 by AA Jan 14, 2015 12:00 am
Al-Qaeda's branch in Yemen, Al -Qaeda in the Arabian Peninsula (AQAP), has claimed responsibility for last week's deadly attack on French satirical magazine Charlie Hebdo'sParis headquarters, saying it had come on the orders of top Al-Qaeda leader Ayman al-Zawahiri.

In a video posted on its Twitter account, the Yemen-based group said its leaders had "planned and financed the operation and chose who would carry it out based on orders from group leader Ayman al-Zawahiri."

The video, dubbed "A message on the blessed Paris operation," featured the voice of AQAP leader Nasr al-Assi, who asserts that preparations for the attack were carried out through Anwar al-Awlaki, the U.S.-born AQAP propagandist killed in a 2011 U.S. drone strike in Yemen.

Said and Cherif Kouachi, two brothers and the suspected perpetrators, were killed by police on Friday in a warehouse in Dammartin-en-Goele, a small town north of Paris.