Demirtaş: HDP will run in national election as a party 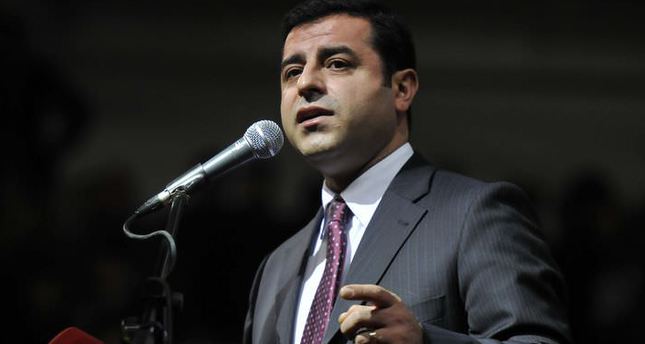 The Peoples' Democratic Party (HDP) Co-Chair Selahattin Demirtaş harshly denied allegations in a televised interview on HaberTürk on Tuesday that the main opposition Republican People's Party (CHP) and HDP would create an alliance for the upcoming national elections, and said that the HDP party would run alone in the election. As the party is at risk of losing seats in Parliament due to the ten-percent election threshold, Demirtaş announced that the party would run in the election under the HDP umbrella instead of running as independent candidates.

The HDP has occupied the Turkish political agenda due to the ten-percent threshold, as its votes hover around the threshold. Following the Constitutional Court's decision not to lower the ten-percent election threshold for political parties to enter Parliament in recent weeks, polls were issued asking whether the party would be able to pass the election threshold. In the interview, Demirtaş announced that the HDP's votes are around 9.5 percent.

Demirtaş touched on the ongoing reconciliation process between Ankara and Turkey's Kurds to successfully end the decades-long conflict, and expressed his frustration over the course of the process calling for transparency in the negotiations. The conflict started when the PKK took up arms against the Turkish state with the aim of carving out an independent state in southeastern Turkey.

Launched in 2009 by the Turkish government, the reconciliation process aims to normalize life in eastern Turkey and has lowered casualty figures on both sides to record lows. The PKK announced a cease-fire on March 21, 2013 via their imprisoned leader, Abdullah Öcalan. This has accelerated negotiations between both sides, thereby putting an end to most of the violence that has claimed the lives of more than 40,000 people over a 30-year period.

However, reconciliation talks stalled after the October 6-7 Kobani demonstrations. Dozens were killed in the protests, which included pro- and anti-PKK groups who felt that there was a lack of government support for Kurdish forces defending the town of Kobani in Syria against the Islamic State of Iraq and al-Sham (ISIS).

Even though the demonstrations harmed the government's trust in the HDP and other parties involved in the protests, Prime Minister Ahmet Davutoğlu announced on Tuesday that everything was back on track. Having shaken off the provocations that damaged the reconciliation process, the two sides are clinging to the hope that a resolution will soon be reached. The PKK is listed as a terrorist organization by Turkey, the U.S. and EU.

Responding to a question whether the Turkish actor Kadir İnanır, who was in the Wise Men Committee set up for the reconciliation process, would be a deputy candidate from the HDP in the upcoming election, the Demirtaş said that they would try to convince İnanır to run.