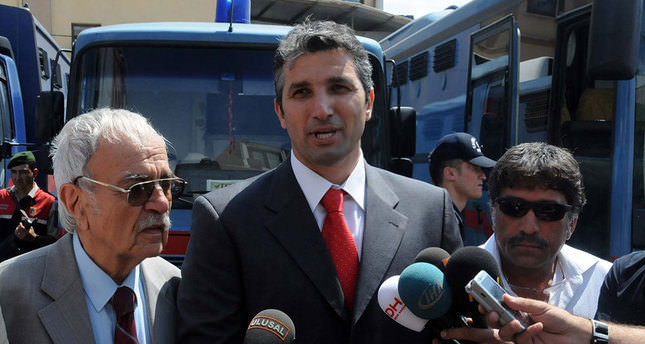 by Ayşe Şahin Jan 14, 2015 12:00 am
Nedim Şener, an investigative journalist who came to the fore with allegations that he was entrapped by Gülenists in the government for unveiling their alleged link with the murder of Armenian-Turkish journalist Hrant Dink in 2007, gave a statement to the prosecutor's office as a plaintiff.

Şener was allegedly put behind bars by members of the Gülen Movement in the police and judiciary in a bid to obstruct his investigation into Dink's murder. He was incarcerated in the Odatv trial, which was launched as part of the Ergenekon investigation into an attempted coup against the government in 2012.

According to Şener, who was released following the 11th hearing of the Odatv trial by Istanbul's 16th High Criminal Court, his arrest was a means for the Gülen Movement to hamper the investigation he was carrying out into the Dink murder, which revealed offenses committed by the movement. In the statement that he gave to Public Prosecutor Cumali Karakütük, Şener claimed that Gülenists had aimed to take him down after he claimed that connections between the Ergenekon investigation and the Dink trial ultimately extended into a "conspiracy" by the Gülen Movement.

The Gülen Movement is accused of wiretapping thousands of individuals, including high level government officials, and allegedly infiltrating state institutions including the police and judiciary in order to overthrow the government. These so-called infiltrators allegedly aimed to hush up the findings of Şener's investigation by pressing charges against him as part of the Odatv trial by fabricating crime.

Odatv.com is a Turkish news website. In February 2011, Odatv's offices were raided, and some of its staff were arrested. Digital documents linking to the Ergenekon conspiracy are the basis of the case against Şener and the other detainees in the Odatv case. Examinations of the documents conducted by computer experts at some Turkish universities and an American data processing company, DataDevastation, have refuted the validity of the documents, concluding that outside sources targeted the journalists' computers.

"The digital documents that form the basis the indictment and serve as evidence against me are fakes. There is indeed no evidence that the so-called documents were prepared by the employers of the website," Şener said in the statement. He further said that the trial was a trumped up case and a conspiracy against journalists who are critical of the Gülen Movement and of those who investigate the Dink murder.

Saying that the digital documents that were the basis for the charges against him were proven to be fake, he continued, saying "I am filing a complaint against the personnel of the National Police Department who were conducting the investigation, but somehow concealed this information in their reports."

Şener further said that the law enforcement officers who launched and conducted the Ergenekon investigation were the ones who included him in the investigation into Odatv.

The story of Şener's confrontation with the Gülen Movement dates back to when Şener documented the alleged connections of top police officers to the Gülen Movement in his books, "Dink Cinayeti ve İstihbarat Yalanları"(The Dink Murder and Intelligence Lies) in 2009 and "Kırmızı Cuma" (Red Friday) in 2011. The top police officers in question include Ali Fuat Yılmazer, who was then the head of the police intelligence unit, and Ramazan Akyürek, the head of the Trabzon Security Directorate, who shouldered the responsibility for Dink's murder in 2007, which was committed by Ogün Samast, a resident of Trabzon.

"It is all because I revealed in my book that the former officers Yılmazer and Akyürek were responsible for Dink's murder," Şener claimed. He continued, saying that Yılmazer was feeding animosity toward Şener by writing about his negligence and holding him responsible in the Dink murder. That is why, he said, Yılmazer included him in the Ergenekon investigation.