US: Turkey works closely with US to stop flow of ISIS fighters 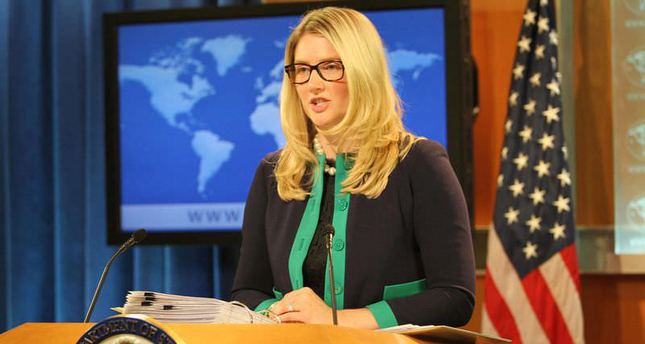 by Nurbanu Kızıl Jan 14, 2015 12:00 am
Marie Harf, the deputy spokesperson for the U.S. Department of State has stated in a press statement released on Wednesday that the U.S. is working very closely with Turkish authorities identifying and blocking the passage of foreign fighters who want to join the self-proclaimed Islamic State of Iraq and al-Sham (ISIS) through Turkey to Syria.

Speaking at the Daily Press Briefing, Harf underlined that Turkey is trying its best to stop the flow of foreign fighters and that it is cooperating with the U.S. In response to a question about what US allies such as Turkey are doing in the fight against ISIS and terrorism, Harf stated that they are aware that it is a huge challenge.

"It's a huge problem," said Harf, adding that the borders are very large and often very porous.

"And believe me, Turkey is affected by this more than almost any other country, given their geographic proximity" she said, underlining that Turkey is aware that ISIS and terrorism pose a serious threat and a problem.

She noted that Turkey is working very closely with the U.S. to try and close down the borders to crack down the flow of foreign fighters.

Harf referred to the UN Security Council resolution which calls on all member-states to stem the flow of foreign fighters to Syria and highlighted there is a concerted international effort in the fight against ISIS.

Mevlüt Çavuşoğlu, Turkey's Minister of Foreign Affairs recently said that Turkey had shared intelligence on Hayat Boumeddienne, the widow of a Paris terror suspect - who took people hostage in a kosher supermarket and killed four - with France upon her arrival to Turkey, but no action was taken by France to the dismay of Turkish authorities.

Turkish authorities have consistently stated that international cooperation and intelligence sharing are crucial to stopping the flow of foreign fighters to Iraq and Syria.