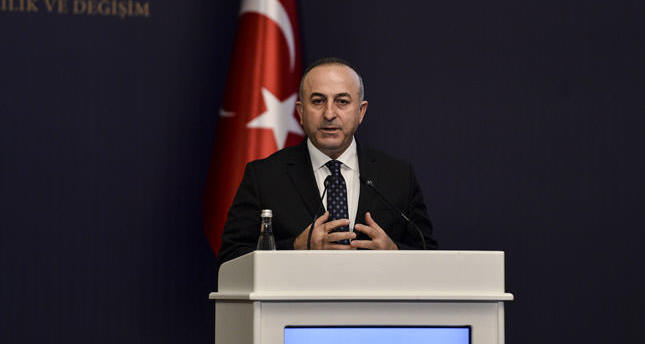 Foreign Minister Mevlüt Çavuşoğlu, in an interview with state-run Anadolu Agency (AA), has criticized Russia on the Crimean Tatar issue even though Moscow and Ankara are eager to develop bilateral ties.

"[Turkey's] good bilateral relations with Russia do not mean that we recognize the annexation of Crimea," he said, referring to the economic agreements between Turkey and Russia. Emphasizing that Moscow promised to grant ethnic and cultural rights to Crimean Tatars that were not given by Ukraine, Çavuşoğlu said: "We are sorry to say that Russia unfortunately has not fulfilled these promises."

Touching on the latest development in Turkey-Russia relations, he said that both countries are determined to further bilateral relations as Russia is Turkey's second largest trade partner after Germany.

He added that Turkey exerted efforts to establish dialogue between Kiev and Moscow and that when Russian President Vladimir Putin's visit to Ankara in December Turkey expressed concerns over Russia's annexation of Crimea, as Turks have ethnic and linguistic ties to Crimean Tatars in the region and Turkey has pledged to defend their rights.

There are 280,000 Crimean Tatars in the Autonomous Republic of Crimea, which constitute roughly 13 percent of the total population. More than 4,000 people have been killed and 9,000 wounded since the conflict between the Ukrainian government and pro-Russian separatists in eastern Ukraine started in mid-April, according to the U.N.

Despite developing ties between the two countries, Turkey and Russia has some divergences over specific political issues. The situation of Crimean Tatars is one of the issues that Turkey is sensitive to, according to the officials.

Çavuşoğlu spoke about the South Stream natural gas pipeline project announced by Putin on his visit to Turkey while dealing with U.S. and EU sanctions on Russia due to the Ukraine conflict. Explaining that currently there is no legally binding agreement between the two countries, Çavuşoğlu said that the work regarding the issue is underway.

When Putin arrived in Turkey in December with 10 ministers in tow to promise a vast increase in trade and closer relations despite sharp differences over the crises in Syria and Ukraine, Putin cancelled the multi-billion dollar South Stream gas pipeline to Europe, saying instead that Russia would work with Turkey on a new gas hub.

Çavuşoğlu added that Turkey's current priority is to bring the Trans-Anatolian Natural Gas Pipeline (TANAP) into action. TANAP is intended to transport natural gas from the Shah Sea 2 and other gas fields in Azerbaijan, and possibly from other neighboring countries, through Turkey into Europe.

Regarding the new Iraqi government, Çavuşoğlu said that a new and inclusive government has been established in Iraq and Turkey opened a new page in its relations with the country.Bilateral relations between Turkey and Iraq had reached a breaking point during the tenure of Iraqi former Prime Minister Nouri al-Maliki. Ankara widely criticized Maliki for following policies that alienated all groups in the country other than Shiites, aiding the rise of the Islamic State of Iraq and al-Sham (ISIS) that is currently wreaking havoc in Iraq and Syria. Iraq and Turkey appear to be attempting to fix the soured relations since the formation of the new government under the leadership of Prime Minister Haidar al-Abadi.

"We stand with Iraq and Iraq's public in combatting terrorism and ISIS. We gave support to Iraqi peshmerga forces and we will continue to do so. We also contribute to their training and equipping," he added.

Turkey allowed the passage of Kurdistan Regional Government (KRG) peshmerga forces to enter Kobani through its border to fight alongside Kurdish groups already battling ISIS in accordance with the October 2 troop mandate to show Ankara's continued efforts to assist in putting an end to ISIS's siege of Kobani.