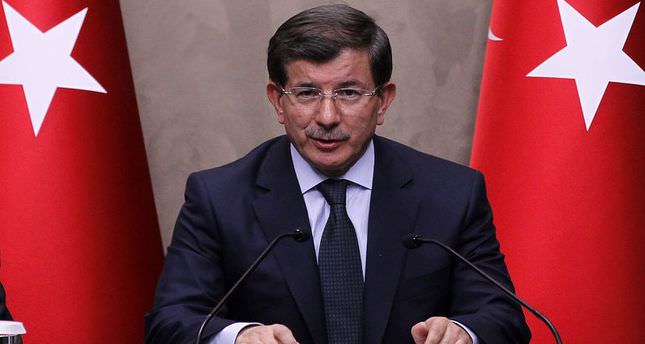 by Nurbanu Kızıl Jan 15, 2015 12:00 am
Prime Minister Ahmet Davutoğlu has stated that publishing the Prophet Muhammed's cartoons in Turkey is an extremely sensitive issue, and said it is provocative to insist on publishing degrading depictions of the Prophet as it is offensive to a majority of Turkish people.

Holding a press statement before he left for Brussels on Thursday, Davutoğlu highlighted that freedom of the press does not entitle anyone to insult the beliefs of others.

"Publishing insults against a prophet who has been sent as a mercy to mankind is not freedom of expression" said Davutoğlu, a day after daily Cumhuriyet published cartoons from the exclusive Charlie Hebdo issue in Turkish, adding that it is everyone's own choice to not believe, but this does not entitle anyone to insult others as it is an extremely sensitive subject in Turkey.

He added that many people in Turkey would accept insults against themselves, but would not accept their prophet being insulted.

According to Davutoğlu, people in Turkey are determined to protect the dignity and honor of the Prophet and the government will take all precautionary measures to avoid tension and violence. "The whole world is aware of Turkey's sensitivity towards depicting the Prophet Muhammad" he said, reiterating that insulting the prophet cannot be juxtaposed.

"Turkey will not let anyone insult the Prophet Muhammad" said Davutoğlu, while highlighting that Turkey, which has been a victim of terrorism will also stand against all acts of terror committed anywhere in the world.

Davutoğlu agreed with President Recep Tayyip Erdoğan's position criticizing the attendance of Israeli Prime Minister Benjamin Netanyahu in the unity rally which took place in Paris last week and stated that Netanyahu's attendance in the anti-terror rally is paradoxical.

"Netanyahu committed crimes against humanity just like the Paris attackers; his attendance to anti-terror rally does not change this fact" he said, noting that Netanyahu has committed crimes against humanity by killing thousands of innocent children in Palestine, destroying thousands of houses and normalizing the killing of Palestinian civilians, while attacking a flotilla carrying humanitarian aid to besieged Gaza and killing Turkish citizens aboard.

The Turkish Prime Minister also criticized Israeli foreign minister Avigdor Lieberman for accusing President Erdoğan for being an "anti-Semitic neighborhood bully." He noted that anyone who accuses Turkey of being anti-Semitic is welcome to come to the country and speak with the Jewish community here.

Referring to the Israeli officials, Davutoğlu said "if they are looking for a bully, they should just look at a mirror" and underlined that Turkey has never discriminated against or persecuted a religion and will always stand against persecutors who oppress people regardless of their religious identity, whether they are Christian or Jews.

"Our history and our current policies provide a clear evidence of this fact and anti-Semitism has never existed in the history of Turkey" Davutoğlu said.