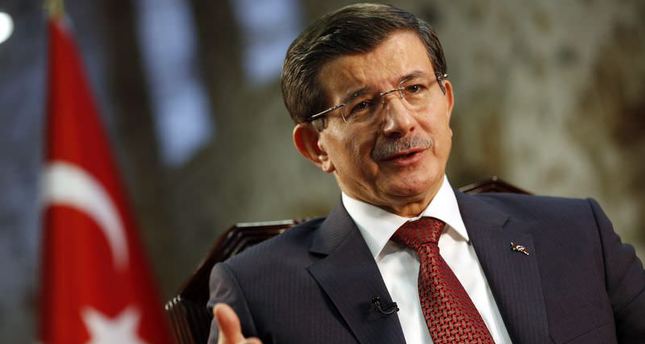 by Daily Sabah with Agencies Jan 16, 2015 12:00 am
Turkish Prime Minister Ahmet Davutoğlu accused his Israeli counterpart Benjamin Netanyahu on Friday of terrorism and said Israeli "provocations" such as the bombardment of Gaza were contributing to radicalisation in the Muslim world.

In an interview, Davutoğlu said peace in the Middle East and the eradication of extremist groups would be virtually impossible without the establishment of a Palestinian state.

"(Netanyahu) himself killed, his army killed children in the playground. They killed our citizens and an American citizen in international waters. This is terrorism," Davutoğlu said, referring to a 2010 Israeli assault on a Turkish aid boat attempting to break Israel's blockade of the Palestinian Gaza Strip.

"Nobody can argue about Israeli aggression in Jerusalem in the al-Aqsa mosque," he added.

"These provocations create frustration in the Muslim world and are becoming one of the reasons why these radical trends are emerging," he said.

"If we want to establish peace and order in the Middle East, eliminating all the extremist forces, we have to solve the Palestinian question."

Davutoğlu on Thursday compared Netanyahu to the militants who killed 17 people in Paris last week, saying both had committed crimes against humanity.

Netanyahu has called for an international condemnation of Davutoğlu's remarks and those of President Tayyip Erdogan, after he criticised the Israeli prime minister's attendance with other world leaders at a solidarity march in Paris.

In response Davutoğlu said on Friday that Netanyahu was left isolated after he called on world leaders to condemn Turkish President Recep Tayyip Erdogan's remarks about his presence at Sunday's mass anti-terror march in Paris.

"Netanyahu called all world leaders to react against our president and me, but he was alone in doing that. Have you heard anyone reacting or making a remark against us?" he said during a live interview on Friday evening on Turkey's private NTV channel.

On the domestic political front, Davutoğlu said he expected a request to be made to the U.S. authorities for the extradition of Fethullah Gülen, the controversial leader of the Gülen Movement, accused by Erdogan and the government of attempting to topple the Turkish government and infiltrating state institutions through Gülenist agents.

A Turkish court issued an arrest warrant in December for Gülen, who has lived in self-imposed exile in Pennsylvania since 1999. Asked if an extradition request would now follow, Davutoğlu said: