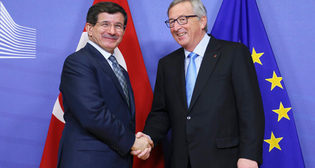 Erdoğan’s legitimate criticism of then Israeli President Perez at Davos in 2010 triggered certain circles to start an anti-Turkey campaign in Europe. The campaign was taken to the next level after Turkey opposed the military coup in Egypt, PM Davutoğlu told journalists on the prime ministerial plane returning from Brussels

Prime Minister Ahmet Davutoğlu, speaking to journalists on his flight back from Brussels late on Thursday, criticized the anti-Turkey campaign on freedom of expression and press carried out in Europe, arguing that when he asked European officials to corroborate these baseless claims, none could respond. Davutoğlu, who met with European Commission President Jean Claude Juncker, European High Representative for Foreign Affairs Federica Mogherini and European Council President Donald Tusk during his visit, noted that there were thousands of newspapers in Turkey with varying views and four of the five newspapers with the highest circulation were openly anti-government.

"Commission members are accosted with such propaganda. Some are trying to portray Turkey as if it is similar to North Korea or Venezuela," said Davutoğlu,

Davutoğlu criticized the conduct of foreign media organs, such as The New York Times and Washington Post, for publishing tens of articles about Turkish diplomats kidnapped by the Islamic State of Iraq and al-Sham (ISIS) but refrained from doing the same when their citizens were in danger. "They were told to protect their citizens and didn't publish any articles. But they are careless when it comes to us," he said.

"The week when there were terrorist attacks in France, 64 people were detained and questioned for what they wrote on Twitter or Facebook. No one accused France of clamping down on freedom of expression or press. In Turkey on October 6-7, someone wrote a Twitter message that said, 'An armed rebellion has begun. Take up your weapons.' When we take action, everyone talks about us," he said.

He said there was a network of media giants that was even stronger than some states. "We do everything we can but this network has already made up its mind. It has decided to obstruct Turkey's success story and demoralize President [Recep Tayyip] Erdoğan," said the prime minister.

He said this network had pressed the button after Erdoğan criticized Israeli President Shimon Perez in Davos in 2010 and had escalated its anti-Turkey campaign ever since then.

Davutoğlu also criticized the European Parliament's 2014 progress report on Turkey for being fooled by the anti-Turkey campaign. He said the report, which praised the government's efforts to further the reconciliation process but ignored the threat posed by the Gülen Movement, would be returned with a diplomatic note when it was received. "We presented to each European parliamentarian an information note. What they produced is one-sided," he said.

He said he had asked officials at the European Parliament to name a single one of the arrested journalists mentioned in the report. "No one could give me a single name."

"I told them there were seven journalists in jail and each one of them was found guilty of a violent crime."

Davutoğlu argued that no one could expect the government to allow anything that insulted Prophet Muhammad.

During his meetings in Brussels, Davutoğlu noted that the commission was new and the recent months were spent with two sides getting to know each other. "Both sides want to improve ties," he said.

The prime minister described his meeting with Juncker, where bilateral ties, Cyprus, Syria and Ukraine were discussed, as "warm," noting that the commission president was knowledgeable. "The meeting with European High Representative for Foreign Affairs Federica Mogherini was equally comprehensive," he said, adding that a new era had begun between the two sides.

He said Europe was gradually becoming more introverted. "We are faced with a Europe that is focused solely on its internal problems, failing to lead the world," he said, adding that this withdrawal had more to do with the certain economic and political problems it faced. "Governments change too often. There is a lack of visionary leaders, unlike in the 1950s and 1960s," he said. Davutoğlu also noted that he had met with 70 European ministers during his tenure as the foreign minister and said, "The number of ministers I listened to with interest would be five. There is no one with a vision, who can describe what the EU will look like in five years. Those who have the final say on Turkey's membership process are not courageous," he argued.

He said his meeting last weekend with German Chancellor Angela Merkel had been better than expected. "We decided to increase the frequency of meeting between delegations. All European countries, left alone, want to maintain good relations with Turkey. They want to utilize Turkey's strategic power. However, when they come together they push the brakes on Turkey's membership process."

On the government-initiated transparency drive announced on Wednesday, he said the initiative was due to certain discrepancies. "If a state decision in a certain region produced a huge property mark-up, it belongs to the state. Our 12-year experience in government is utilized to debate and address the deficiencies," he said.

The prime minister also said that the ruling Justice and Development Party (AK Party) had already initiated its preparations for the general election scheduled for June. "We have started the campaign by beginning the provincial congresses. I have visited 40 provinces until now and I will have visited all provinces by the time the election is held. There is renewal within provincial party organization. Wherever I go, the opposition can be seen nowhere."

He said AK Party branch chairmen could not have any direct links to the municipal governments. "It is not proper to maintain a network that could be misconstrued. We will balance meritocracy with strong grassroots support. Balance between men and women is also important. We need to increase women's participation to 25 percent as soon as possible. Same is true with the balance between generations," he said.