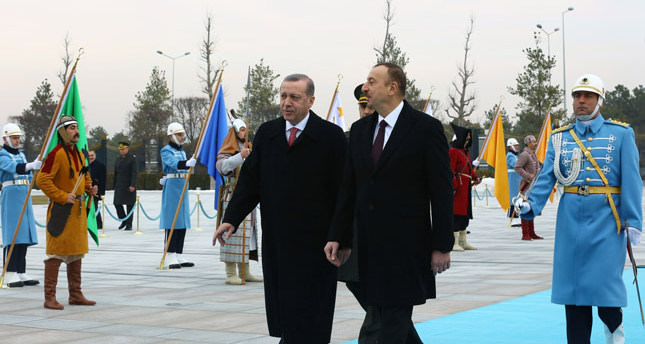 by Sena Alkan Jan 16, 2015 12:00 am
President Recep Tayyip Erdoğan said yesterday, in a press conference with his Azeri counterpart Ilham Aliyev in Ankara, that the High Level Strategic Cooperation Council between the two countries will further relations in the fields of politics, economics, military, education and culture.

Highlighting the strong ties between Turkey and Azerbaijan, Erdoğan said that the political relations between the countries are "flawless" and added: "I believe that both countries have this determination [to boost the relations in all fields]."

Aliyev arrived in Turkey on Wednesday to hold bilateral talks with the president and Prime Minister Ahmet Davutoğlu over political, economic and cultural cooperation as well as trade volume between the two countries and to attend the fifth meeting of the High level Strategic Cooperation Council.

Erdoğan welcomed Aliyev with an official ceremony at the Presidential Palace in Ankara. Turkic soldiers, dressed like soldiers from the 16 Turkic empires throughout history, appeared at the ceremony. The soldiers at the ceremony were arrayed with historical clothes such as ornate helmets, spears, swords used by Turkic states in the history.

The 16 soldiers representing Turkic states were used for the first time in a welcoming ceremony when Palestinian President Mahmoud Abbas paid an official visit to Turkey on January 12.

Another unprecedented incident happened at the ceremony when the presidency's band played the "Resurrection Anthem" for the first time, which is about the establishment of the Ottoman Empire. The anthem was played in the style of Erdoğan's popular election song "Recep Tayyip Erdoğan," adapted from Kazahk song "Dombra" and played during the March 30 local elections.

Touching on the regional issues in the press conference, Erdoğan said that he was informed by Aliyev over the resolution process of the Nagorno-Karabakh issue between Armenia and Azerbaijan.

"Unfortunately, the OSCE Minsk Group has not taken concrete steps [toward the issue] and has stalled the process. It is sad that despite the international verdicts, they still try to stall the process. I would like to express once again that Nagorno-Karabakh is part of Azerbaijan and we [Turkey] will continue to support Azerbaijan to resolve the issue by protecting the territorial integrity of Azerbaijan. On this issue that we continuously express our sensitivity, Turkey's stance is crystal clear."

The Turkish leader said that trade volume between the countries has reached $5 billion and the target is to reach $15 billion by 2023. "I believe that both countries have this determination, this political stability and we will achieve this," Erdoğan said.

The two leaders signed several agreements as part of the council to develop the relations between the countries.

Accepted as sister countries, Turkey and Azerbaijan share the same history and culture and the leaders reiterated in all platforms that both countries have the utmost determination to further these exemplary relations.

Erdoğan paid his first foreign visit to Azerbaijan after he took the presidential office on August 10 to show the unity and brotherhood between the countries. Similarly, when the Justice and Development Party (AK Party) won the local elections on March 30, Erdoğan paid a visit to Azerbaijan to enjoy the victory as part of a Turkish political tradition.