UN adviser to Cyprus: Strong ties between Ankara and Cypriot Turks favor us 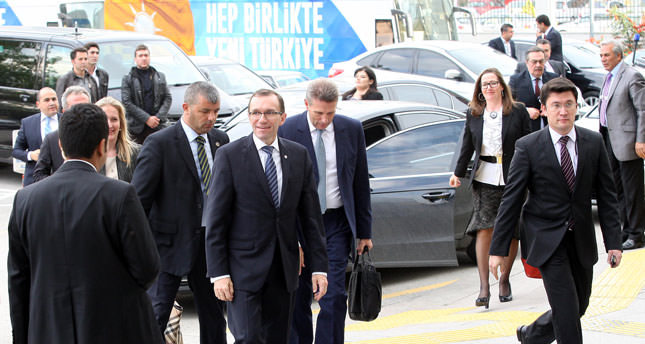 "The hydrocarbon exploration off Cyprus must be kept away from negotiations. The Hydrocarbon crisis brought the process to that point," he said.

Eidi remarked on the hydrocarbon exploration that led to the present crisis in the negotiations: "We think the hydrocarbon crisis is a serious issue, since it is a factor constantly blocking the progress of the negotiations and it prevents the continuity of the talks. If a federal resolution is achieved on Cyprus, the matter of how the hydrocarbon income would be shared within the scope of federal state authority is already agreed upon between the parties.

"This situation is changing now. Some thoughts regarding whether Navtex should exist or not, prevails in the works investigating whether a mutual decision mechanism should be established or the Cyprus Republic should continue. The factor preventing our progress in negotiations is those differing opinions. I am sure that if we had been at the table, we would have already solved the hydrocarbon crisis.

"On Cyprus, the parties agree on which parts should go. However, there is a disagreement on where they are. An agreement will be made at negotiations in the future, but there seems to be no agreement for the present situation."

Eidi also talked on the second Navtex provided by Turkey, which conducts seismic research in the Eastern Mediterranean on behalf of Turkish Cyprus. Eidi underlined that everyone should contribute to peace and stability on Cyprus. "We know from the very beginning that Cypriot Turks want the hydrocarbon issue to be tabled. But their wish could not be realized. However, last week, Greek Cypriot President Nicos Anastasiadis signaled that hydrocarbons can be tabled at the negotiations."

Eide said: "Turkish Cyprus should answer this message. The second Navtex was provided by Turkey, but the Barbaros Hayrettin Pasha ship has not set sail yet. Greek Cypriots have proposed some changes regarding certain subjects. They started to change on topics such as meeting without precondition and negotiating on hydrocarbons. Of course the functions and discourses progress step by step in politics. I advise the Turkish Cypriots not to focus on policies according to Greek Cypriot discourses."

He continued: "The Greek side expressed that they did not have any written or official communication with Turkish Cypriots as part of the drilling agreements declared by Greek Cypriots, but they were ready to discuss the hydrocarbon agreement they made with Turkish Cyprus.

"In sum, the world would be pleased to see the resolution of the Cyprus issue. I would be the most happy if the two leaders agree to commence the negotiations now. Of course I cannot force the leaders, they should be eager themselves to do that. It does not matter when the negotiations would start. What really matters is achieving a final result at negotiations without any interruption. I hope that both parties will not leave the table."

Eidi also commented on whether hydrocarbons are a curse or a boon for Cyprus. "In another region, I saw a hydrocarbon matter turn into a conflict. Based on the statistics, if hydrocarbons are found in a region, I can say it is a harbinger of bad news since it might lead to various political crises. However, if a convenient atmosphere is enabled, hydrocarbons might bring positive developments in economy and politics.

"The reason behind the hydrocarbon crisis in Cyprus is the lack of political stability and a suitable ground. There has been an ongoing problem for years. And we still try to solve this crisis with all our hopes. If the Cyprus issue is not resolved, we may be facing the evil face of hydrocarbons."

Eidi also spoke about Foreign Minister Mevlüt Çavuşoğlu's one-day visit to Cyprus. "I don't know Mr. Çavuşoğlu's reason for visiting. However, I wish to say he might have come for some motivating initiatives for the restarting of negotiations. Our relation with Ankara is constructive and positive. Ankara's approach to the resolution of the Cyprus issue is positive. We cannot ignore that. The close and strong relations and cooperation between Turkish Cyprus and Ankara favor us. We are pleased with this picture."