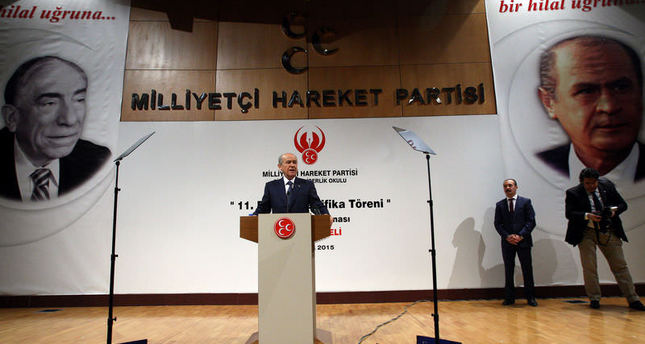 by Nurbanu Kızıl Jan 17, 2015 12:00 am
Devlet Bahçeli, the leader of the Nationalist Movement Party (MHP) stated on Saturday that President Recep Tayyip Erdoğan has the constitutional prerogative to chair the cabinet meeting for a one-off session on Monday January 19.

"President Erdoğan is using his constitutional prerogative in leading the cabinet meeting" Bahçeli said speaking at a press conference, referring to the constitutional provision permitting the president to hold such meetings.

Acknowledging the constitutional right of a president to hold such meetings, Bahçeli warned that the move could be considered as an "insult" to Prime Minister Ahmet Davutoğlu if the president is attempting to hold this meeting in efforts to change the current system into a presidential one.

In response to allegations that Erdoğan's cabinet meeting would decrease the powers of the prime minister, Ahmet Davutoğlu in a recent televised interview has stated that this is not the case and there would be no changes in the prime minister's or president's powers.

A provision in the Turkish Constitution enables the president to chair cabinet meetings when deemed necessary, even though former presidents have not often made use of this prerogative. The frequency of holding such meetings is also under the discretion of the president.