Cabinet chaired by President focuses on harmony in national security 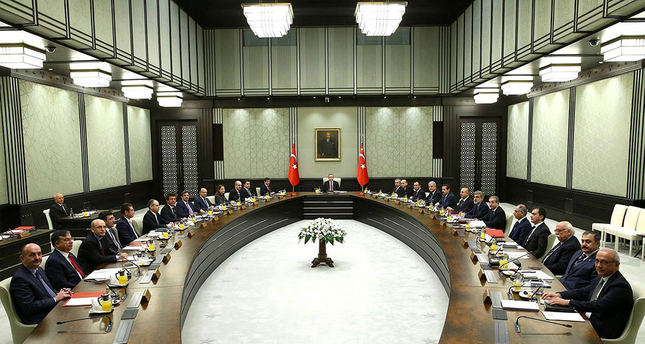 Erdoğan will chair the first cabinet meeting as president on Monday. Harmony in diplomacy, economy and national security will be the meeting’s priority

The Cabinet meeting, which has triggered ongoing debates and speculations of whether President Recep Tayyip Erdoğan will chair the meeting, will be held on January 19. It was recently announced that the agenda of the first Cabinet meeting chaired by the president will include Turkey's current investments and continuing projects.

According to sources from the Presidential Palace, details of the cooperation between the government and the presidency and the necessary steps that need to be taken to maintain harmony between the prime minister and the president are expected to be outlined in the first Cabinet meeting chaired by Erdoğan as president on Monday. Sources also indicated that there are four main areas in which the Presidency would like to work in harmony – national security, foreign policy, the economy and information technologies.

Under the new scheme within the Presidency, 12 new desks will be founded to develop policies and strategies, to take a role in coordinating state institutions and consulting the government. Accordingly, while the security policies desk will oversee the Kurdish reconciliation process and the conflict with the Gülen Movement whose members are alleged to have infiltrated state institutions and other security issues, the strategy desk will be in charge of ties with the government and the remaining presidencies will be reserved for foreign relations, social and cultural work, economy monitoring and coordination, information technologies, corporate communications and public relations.

Devlet Bahçeli, the chairman of the Nationalist Movement Party (MHP), said on Saturday that Erdoğan has the constitutional prerogative to chair the Cabinet meeting for a one-off session on Monday, January 19.

"President Erdoğan is using his constitutional prerogative in leading the Cabinet meeting," Bahçeli said speaking at a press conference, referring to the constitutional provision permitting the president to hold such meetings.

Acknowledging the constitutional right of a president to hold such meetings, Bahçeli warned that the move could be considered as an "insult" to Prime Minister Ahmet Davutoğlu if the president is attempting to hold this meeting in efforts to change the current political system into a presidential one.

In response to allegations that Erdoğan's Cabinet meeting would decrease the powers of the prime minister, in a recent televised interview Davutoğlu said that this is not the case and there would be no changes in the prime minister's or president's powers.

While Özal chaired Cabinet meetings from time to time, his successor Demirel chaired the Cabinet meeting only once. Erdoğan is the first directly elected president in the history of the Republic of Turkey, elected by 51.8 percent of the popular vote in the August 10 election.