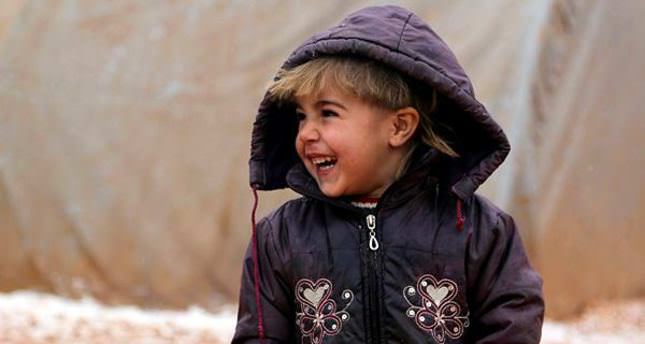 by Ayşe Şahin Jan 18, 2015 12:00 am
Deputy Prime Minister Numan Kurtulmuş has announced that Turkey has spent $5 billion on Syrian asylum seekers, making it the country spending the highest amount on assistance to the war-torn refugees when compared to its national income. He said that this was the case not because the country is the richest in finance but because it is "rich" in hearts.

As Turkey began hosting thousands of war-torn Syrian refugees who fled the violence that surfaced with the civil war in 2011 and continued with the rise of the ISIS threat in their native land, the simultaneous reluctance of Western countries to host refugees began raising eyebrows. While Turkey has mobilized its resources for the unfortunate Syrians in Turkey, whose number is estimated to be over 1.5 million, Western countries, whose incomes are comparatively high, have taken a step back from helping the needy refugees.

"$5 billion have been spent on Syrian refugees fleeing the turmoil in their homeland since April 2011, and 1.7 million are taking refuge in Turkey," Kurtulmuş said, speaking at an AK Party congress in Kahramanmaraş province.

The violence that cannot be subdued in Syria and keeps escalating has forced these refugees to avail themselves of shelter from other states. Turkey is at the top of the list of these states, as a result of the assistance it provides refugees.

"There are many charities across the world, and there are countries much richer than us. But the assistance they provide does not surpass $265 million. So how come Turkey can provide these supplies? Is it because it is very rich?" Kurtulmuş said, asking a rhetorical question.

He continued: "When compared to national income, Turkey is at the top of the list in providing assistance to the needy. This is not because Turkey is very rich, but because it is a country with 'rich' hearts."

Even though Syrian refugees are increasingly in need of shelter, only a small number of war-torn Syrians have found refuge in EU countries. According to the EU, almost 60,000 Syrian refugees have applied for political asylum since the start of the current conflict in Syria, the majority in Germany and Sweden.