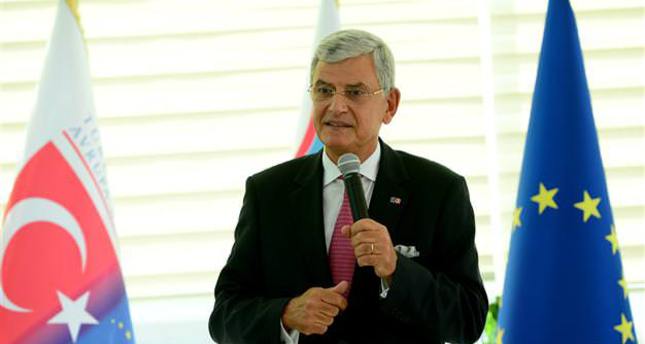 by Anadolu Agency Jan 19, 2015 12:00 am
Turkish EU Minister Volkan Bozkır said on Saturday that it is "unjust" to claim that there is no press freedom in Turkey.

"There are 7,500 media outlets, 280 television channels and newspaper circulations of 5 million copies in Turkey. It is an injustice to say there is no freedom of press in such a country. We will make our best efforts to overcome this," Bozkır said in Vienna referring to the European Parliament's resolution on freedom of expression in Turkey, which the parliament approved on January 15.

Pointing out that in Europe some radical right-wing groups have gained prominence due to unemployment and economic woes, Bozkır said Muslims need to be given assurances and protection from racism and terror threats in Europe.

"Muslims are part of Europe," said Bozkır. "They are living here; they need to be given all kinds of assurances. To prevent racist views from causing harm is the responsibility of these countries."

Twelve people, including prominent journalists and cartoonists, were killed on January 7 in the French capital of Paris when two masked gunmen attacked the headquarters of the Charlie Hebdo magazine, known for publishing provocative material, including cartoons of the Prophet Muhammad.

Five other people, including a policewoman and four hostages in a kosher supermarket in Paris, were killed by Amedy Coulibaly, who had links with the two suspected gunmen for the magazine attack, brothers Cherif and Said Kaouchi.

The attacks caused uproar around the world, and led to attacks against mosques and Muslims in Europe.