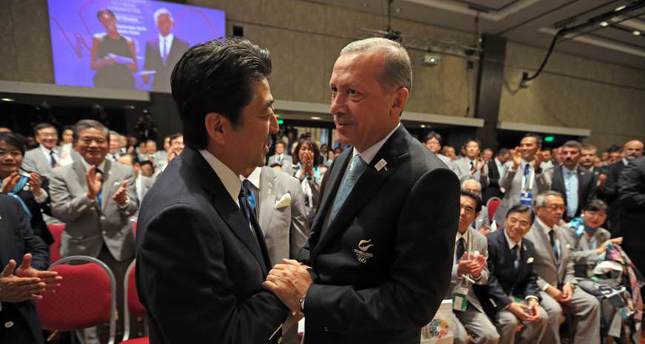 by Daily Sabah Jan 20, 2015 12:00 am
President Recep Tayyip Erdoğan has held a phone conversation with Japanese Prime Minister Shinzo Abe on Tuesday about the two Japanese hostages being held by the self-proclaimed Islamic State of Iraq and al-Sham.

According to presidential office sources, Erdoğan told Abe that Turkey is ready to share intelligence to help Japan rescue the hostages.

On Tuesday, the self-proclaimed Islamic State of Iraq and al-Sham (ISIS) group threatened to kill two Japanese hostages unless they receive a $200 million ransom in 72 hours, directly demanding the ransom from Japan's premier during his visit to the Middle East.

Prime Minister Abe vowed to save the men, saying: "Their lives are the top priority."

During the phone call, both leaders also exchanged views on bilateral relations and international issues as well as Turkey's G-20 presidency and the nuclear power plant in the Black Sea region of Turkey.