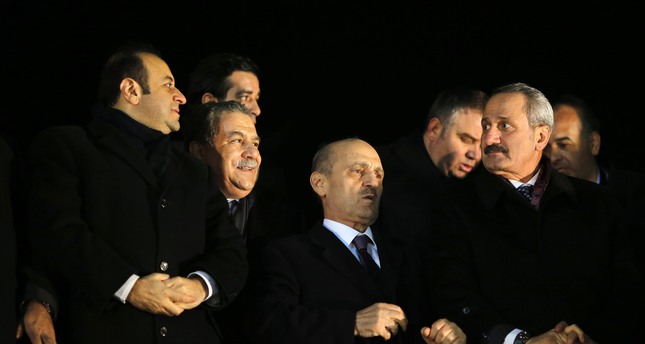 by Daily Sabah Jan 20, 2015 12:00 am
Turkish parliament general assembly is set to vote on whether to refer the four former ministers implicated in corruption investigation in 2013 to top court or not. The parliament will assess the report prepared by the investigation commission that previously voted against the trial for ex-ministers on graft charges.

Four former ministers were targeted in an operation, which was allegedly orchestrated by the Gülen Movement in an attempt to topple the government. The group which is believed to have infiltrated the government's key bodies such as the judiciary and the police is accused of planning a coup by launching December 17 and December 25 operations in 2013.

A 14-member Parliamentary commission was established after the investigation implicating the ministers became public. The commission which looked into the corruption allegations against four former ministers decided on January 5 that there are no grounds to send former ministers to the Constitutional Court to be tried.

The odds are high that the opposition will submit a motion that demands the referral of the four ex-ministers to top court despite the report by the commission which deems it 'unnecessary'. While CHP and HDP will reportedly submit four motions for each minister, MHP is planning to submit 50 separate motionss for the ex-ministers.

After the motions are read out, the secret voting will be launched. There will be three options in voting. The deputies can accept or reject the trial of ex-ministers or could 'abstain' from voting.

Turkish Prime Minister Ahmet Davutoğlu will not be able to attend the voting due to his trip to Great Britain.

In May, the inquiry commission began a probe into corruption allegations against former Economy Minister Zafer Çağlayan, former Interior Minister Muammer Güler and former Environment and Urban Planning Minister Erdoğan Bayraktar. The three officials resigned from their posts after an anti-graft probe was launched on December 17, 2013, while EU Minister Egemen Bağış was later replaced in a Cabinet reshuffle.

Each of the former ministers defended themselves for ten minutes in the Turkish Grand National Assembly (TBMM) and deputies voted on the motion via secret ballot.