Thousands of suspects on Turkish government list for ISIS links 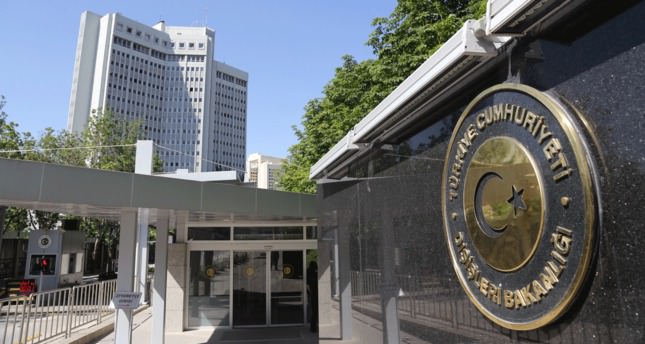 by Anadolu Agency Jan 21, 2015 12:00 am
Turkey's will to fight terrorism should not be questioned especially since the country itself has been affected by the Islamic State of Iraq and al-Sham (ISIS) terrorist group in various ways, Turkish Foreign Ministry said on Wednesday.

Addressing a weekly briefing at the ministry's headquarters in Ankara, spokesperson Tanju Bilgiç said Turkey had so far deported 1,056 people who had come from abroad and tried to enter Syria illegally.

"We have a list that contains 7,833 people from 90 countries, who are suspected of trying to join ISIS," Bilgiç said.

EU's law-enforcement agency Europol estimates there are between 10,000 and 12,000 foreign fighters who have been recruited recently by the ISIS terrorist group. An estimated 2,500 of them are of European origin.

The spokesperson refuted claims that after the Charlie Hebdo attack in Paris, Turkey became a "transitional" country for foreign fighters to join ISIS's terrorist activities in Syria.

"Turkey has been affected by ISIS terror in various ways," Bilgic said. "Therefore, Turkey's will to fight terrorism should not be questioned."

"The bloody-minded regime in Syria caused ISIS to take advantage of the vacuum in the country," he said. "Therefore, the root cause of the ISIS terror has to be removed and a democratic regime has to be established."

Among Turkey's strategic suggestions to deal with ISIS are calls for a "no-fly zone" and "safe zones" on Syrian territory, plus the removal of Assad. Turkey and the U.S. are also involved in a plan to train so called moderate Syrian rebels and Iraqi security forces to beat back ISIS militants in Iraq and Syria.