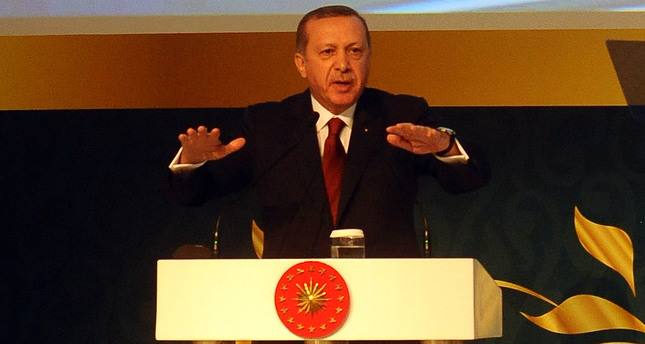 by Daily Sabah with AA Jan 21, 2015 12:00 am
President Recep Tayyip Erdoğan on Wednesday highlighted the need for Muslims to cooperate with and consult each other to reach a consensus. He spoke at the Organization of Islamic Cooperation (OIC) meeting in Istanbul and touched upon the increase of Islamophobia in Europe, and the suffering of Muslims throughout the world.

Erdoğan touched upon the humanitarian crisis in Palestine and said that there has been a tragedy for almost half a century. "It is not humanitarian or Islamic to evaluate the situation in Palestine by taking into consideration personal interests" Erdoğan said, adding that it is not humanitarian or Islamic to look after one's interests in terms of the humanitarian crises in the Muslim world including Syria. He stated that the situation in Syria was critical as those who are being killed are Muslims and it is Muslims who are carrying out the killings, resulting in 'state terrorism.' "We can have different sects, but we have to stand together to end this bloodshed," he said.

The president highlighted that international cooperation and solidarity are necessary to prevent the spread of terrorism and criticized the European Union for allegedly protecting terrorists which are actively in contact with the PKK, despite the fact that it is recognized as a terrorist organization by the EU and the United States.


"This meeting is a great opportunity to discuss the problems of the Islamic world. Because we can resolve every problem as long as we are united," he said.

"When Israel killed more than 2,500 people, including women and children last year, no western country or the UN condemned Israel for its terrorist deeds as they condemned the French attacks."

On Jan. 7, 12 people were killed when masked gunmen attacked the Paris headquarters of satirical magazine Charlie Hebdo, which is known for printing controversial material, including cartoons of Prophet Muhammad in 2006 and 2012. Two days later, four other people were killed in a kosher supermarket in Paris by another gunman.

"There are also several attacks in Nigeria, Libya and in Iraq; why the west does not react against all these terrorist deeds equally?" he asked.

"If the west only condemns the killings targeting the artists or the journalists, then what about the journalists killed by Israel in Palestine in the past years?" Erdoğan said.