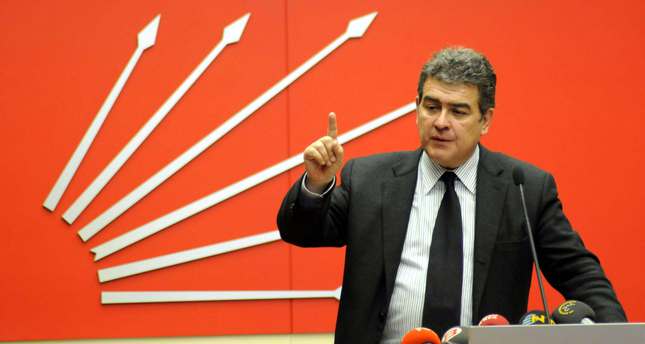 by Daily Sabah Jan 21, 2015 12:00 am
Former Republican People's Party (CHP) Eskişehir deputy Süheyl Batum, who was dismissed from the party, slammed the CHP administration by saying: "Are these ignorant men capable of ruling the country? They have no right to accuse the ruling party"

Appearing in Parliament for the first time since he was dismissed from the party to vote on whether or not to send the four Justice and Development Party (AK Party) former ministers accused of corruption in the December 17 operation to the Supreme Court, Batum harshly criticized his former party.

"Those who dismissed me from the party are not aware of anything. They accused me with baseless allegations. The CHP administration should firstly criticize itself. Those who accused the ruling party of being unlawful are the ones who commit unlawful acts within their own party."

Batum, who spoke out against CHP Chairman Kemal Kılıçdaroğlu and party administration policies, was dismissed from the party following his referral to its disciplinary committee in December.

The storm started when former CHP Ankara deputy and a renowned figure in the party, Emine Ülker Tarhan, announced her resignation due to what she called weak and wrong policies and double standards of the CHP. Backing up Tarhan's statement, in November Batum said Tarhan's resignation would not be the first and there are many dissidents who are suffering from the CHP's wrong policies and are considering resignation.

These remarks led Batum to be referred to the disciplinary committee and later be dismissed from the party.

Following his dismissal, Batum said that he was not informed about the decision and described it as unlawful and a plot against him.

Batum is not the first CHP member to face disciplinary action. CHP İzmir Deputy Birgül Ayman Güler was also referred to the disciplinary committee after her comments over the alleged alliance between the CHP and the Gülen Movement, which is accused of infiltrating the police and judiciary with an aim of toppling the elected government.

The internal conflict within the party first erupted with the March 30 local elections. The failure of the main opposition in the elections caused party dissidents to raise their voices against the party administration while some accused the CHP of cooperating with the movement behind closed doors. The August 10 presidential election also witnessed the same "failure atmosphere" for the party and caused it to hold the 18th extraordinary party congress in September. Even though Kılıçdaroğlu was re-elected chairman, party dissidents continued to criticize their party.