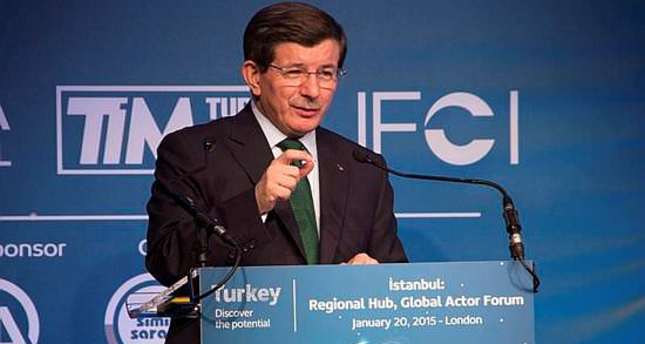 An ethical stance by countries and leaders toward regional problems are needed in order to achieve global peace and stability, says Prime Minister Davutoğlo

Individual countries responding to regional or national challenges in accordance with their own interests and priorities is the wrong way to approach problems, said Prime Minister Ahmet Davutoğlu yesterday, calling for a purpose of unity and ethical stance among nations.

Speaking yesterday at the Forum for Global Change held by London-based Winton Park, a prominent think tank in the U.K. known for research focusing on issues of international security, he pointed out that local problems could have global consequences. Davutoğlu also spoke at the "Turkey's vision for the G20" session at the World Economic Summit held in Davos, Switzerland, arguing that the biggest threat to global stability was the gap between powers. Turkey is serving as G20's president in 2015. He cited the differences between the U.S. and Russia on issues such as Ukraine and Syria was causing serious geo-political and economic instability across the world.

In his in Wilton Park speech, Davutoğlu said: "Turkey is in the middle of a region that was heavily influenced after the collapse of the Soviet Union, including Central Asia, the Balkans, central Europe, the Caucasus, Black Sea and Caspian Sea." Davutoğlu addressed a group of ambassadors, nongovernmental organization representatives, the private sector, the House of Commons and the House of Lords.

Emphasizing the concept of a common destiny for all societies, Davutoğlu pointed out that there are ethical responsibilities for global society, intellectuals, politicians and military leaders and said that conflicts should not be considered only national problems. "In case of a threat to Turkey or the U.K., this is not a national threat, but a threat to the global system and society. There are some who consider it a destiny of Israel, China, the EU or another country. Conflicts and problems cannot be handled as national matters anymore. Either we live in peace altogether or there will be further risks waiting for us. This is an ethical attitude. We need to have this approach," he said.

He maintained that a new security approach is necessary as state-centric security and unity were both things of the past. To "those states that see military power as the ultimate force to define national identity, politics and the economy, it is not valid anymore," he added.

He went on to insist that fragile countries were the result of leaders who did not promote "inclusive" policies by giving the example of Iraq, which he said has long suffered from exclusionist politics, "as all moderate Sunni politicians were arrested or exiled by the previous prime minister," Nouri al-Maliki.

"Now there is inclusivity in Baghdad because the common threat of ISIS [Islamic State of Iraq and al-Sham] created a common destiny, and now Sunnis, Shiites and Kurds are playing a part in the government," he said, adding: "This is how the psychology changed in Baghdad after the change of the methodology toward the direction of inclusivity."

Davutoğlu said that a binding decision for Syria could not be taken by the U.N. and that in case of a humanitarian and emergent issue all political approaches must be set aside. "I want to mention Turkey's attitude toward humanitarian disasters. Turkey tries to do its best in Somalia. We observed the atmosphere very closely there. Coming to the refugee crisis in Syria, Turkey hosts 2 million people and continues to open more refugee camps. Turkey spends its own budget and nobody gave us support in the process. Likewise, we also see that the international community has a lack of support," he said.

Due to this lack of support, he also stressed that international organizations needed to be restructured, starting with the U.N., where a "Cold War mentality" still prevailed. He also mentioned the Palestine and Syria crises as examples of unresolved issues because of the veto power of one or two countries on the U.N. Security Council.

Regarding the latest terrorist attack in Paris at the Charlie Hebdo magazine, Davutoğlu stressed that he went to the march in Paris in order to stand by the French people disregarding "ethnic or religious orientation."

However, he also paid attention to the rise of far-right parties in Europe and expressed his concern for Germany and the U.K.: "I came together with Turks who live in Berlin. I saw that there are many mosques attacked and many people are highly concerned in this atmosphere. Such concerning approaches exist in the U.K. as well, and this is a big problem in terms of politics. However, we need to figure out that there are economic problems behind this rather than ideological one"

He pointed to the unemployment problem as an outcome of the global economic crisis. "When we look at the whole of history, whenever the unemployment rate is high, people first of all look for someone to blame. If you then accuse a group of people, it is suggested that those people should be thrown out, and history shows this as well. Huge responsibilities are laid at the doorstep of those people. This is a consequence of the global economic crisis in a social context."

About Davutoğlu's speech, Chief Executive of Wilton Park Richard Burge stated that Davutoğlu touched two significant points upon during his address in which he spoke within a unique style and broad perspective for world politics. He said: "Prime Minister Davutoğlu's address was a fascinating insight into the dynamic nature of world affairs today, and a rare opportunity to listen to a value based strategic perspective on world politics. The Prime Minister made two points that stood out to me as of vital importance. The first was to note that no country can afford to stand still in a rapidly changing international environment; states face a stark choice of progression or decline. The second was the need to recognise the tightly coupled relationship between a country's values and their strategy in international relations."