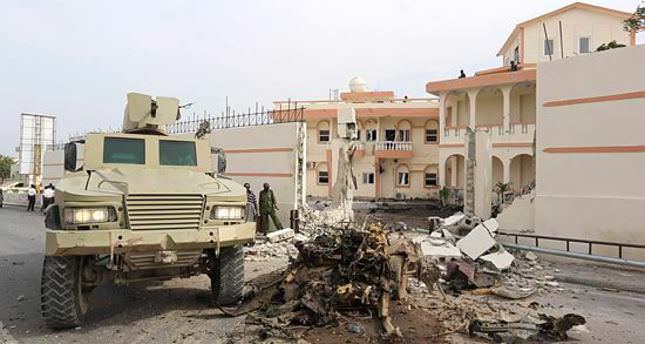 A day before President Erdoğan visits the capital of Somalia, the Turkish delegation has been targeted in a car bomb attack in an attempt to draw Turkey away from its Africa initiative

A car bomb exploded yesterday in front of the hotel in Mogadishu where presidential security detail was staying before President Recep Tayyip Erdoğan's trip top Somalia later this week. The attack comes as Turkey gears up a major Africa initiative to expand commercial and political ties with the regional countries and is seen by some security analysts as an effort to secure a Turkish withdrawal from the continent.

The attack took place outside the hotel where Erdoğan's guards were staying, according to reports.

The al-Shabab militant group, which conducts regular attacks on government personnel and African peacekeepers, claimed responsibility for the attack.

"We attacked [the] hotel and killed several of the Somali police officers who were meeting there," Sheikh Abdiasis Abu Musab, al-Shabab's military operation spokesman, told Reuters. The statement made no mention of Erdoğan's visit, whereas Prime Minister Ahmet Davutoğlu said on Thursday that investigations were under way into whether the bomb was a deliberate attack on Turkish interests.

No injuries among the Turkish delegation have been reported, but three Somalis were reportedly killed.

"We are ready for Erdoğan's visit," Mohamed Osman, a senior official at the Interior Security Ministry, told Anadolu Agency before the attack. "The police, army and the African Union Mission in Somalia (AMISOM) have been deployed at various points in the city to improve security," Osman added. For instance, the main road Mogadishu to the Aden Abdille International Airport has
been closed.

"The road will remain closed until the conclusion of President Erdoğan's visit," Osman said.

Erdoğan arrived in Addis Ababa on Wednesday on an official visit to Ethiopia, where Prime Minister Hailemariam Desalegn welcomed him along with senior officials.

According to Somali presidential spokesmanDaud Aweis, Erdoğan is expected to arrive in Mogadishu on Friday, which will be his second visit to Somalia. Erdoğan is scheduled to hold talks with his Somali counterpart, Hassan Sheikh Mahmoud, along with other top government officials. Erdoğan is also expected to visit several Turkish projects in the capital, including the Mogadishu Port and a new, ultra-modern hospital. He first visited the country in 2011 at the height of the Somali famine. Turkey has since been the most visible foreign country to help war-torn Somalia rebuild its crumbling infrastructure.

Somalia has remained in the grip of on-off violence since the outbreak of a civil war in 1991. Last year, the fractious country appeared to inch closer to stability after government troops and African Union forces – deployed in Somalia since 2007 – drove al-Shabab from most of its strongholds. However, the militant group has continued to launch regular attacks on government forces and African peacekeepers.

The terrorist group al-Shabab, based in Somalia, pledged allegiance to al-Qaida in 2012. As of 2013, the group has retreated from the major cities, but imposes strict forms of Sharia law in some rural regions.