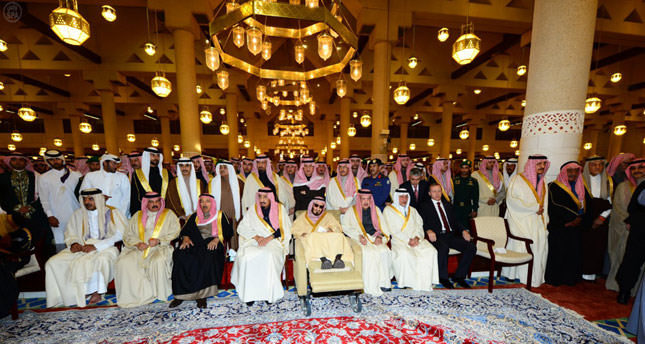 President Erdoğan suspends African tour to attend the funeral of King Abdullah of Saudi Arabia. The president, who was among several world leaders to attend the ceremony, is expected to resume the tour on Saturday

President Recep Tayyip Erdoğan postponed his next stop to Somalia as part of his visit to Africa to attend the funeral of King Abdullah of Saudi Arabia who died early Friday at the age of 90. Having been on tour in Africa where Turkey has made a number of investments and provided much humanitarian aid, Erdoğan on Friday travelled to the Saudi Arabian capital of Riyadh to pay tribute to the king with other heads of state and world leaders. Along with Erdoğan, Qatari Emir Sheikh Tamim bin Khalifa al-Thani, Kuwaiti Emir Sheikh Sabah IV Ahmad al-Jaber al-Sabah, Crown Prince of Abu Dhabi and Deputy Supreme Commander of the Armed Forces Sheikh Mohammed bin Zayed and Pakistani Prime Minister Nawaz Sharif attended the funeral of King Abdullah. Following the funeral, Erdoğan headed back to Africa to finalize his visit to Djibouti and he is expected to be in Somalia on Sunday, according to presidential sources. "We decided to go to Riyadh and are heading there now. But, we will continue with our existing itinerary and visit Djibouti and Somalia," Erdoğan said at a press conference.

On Thursday, a car bomb exploded in front of the hotel in Mogadishu where the presidential security detail was staying before Erdoğan's stop in Somalia. The attack comes as Turkey gears up a major Africa initiative to expand commercial and political ties with the region's countries and was seen by some security analysts as an effort to coerce a Turkish withdrawal from the continent. The attack took place outside the hotel where Erdoğan's guards were staying, according to reports. The Shabab militant group, which conducts regular attacks on government personnel and African peacekeepers, claimed responsibility for the attack.

Many world leaders conveyed their condolences by releasing statements, and the first reaction outside of the region came from the U.S.

"As a leader, he was always candid and had the courage of his convictions. One of those convictions was his steadfast and passionate belief in the importance of the U.S.-Saudi relationship as a force for stability and security in the Middle East and beyond," said U.S. President Barack Obama.

"This is a sad day. The United States has lost a friend, and the Kingdom of Saudi Arabia, the Middle East, and the world has lost a revered leader. King Abdullah was a man of wisdom and vision. I loved my visits with him as a senator and as secretary. Even as he battled age and illness, he held on to his sense of determination … the courageous Arab Peace Initiative that he sponsored remains a critical document for the goal we shared of two states, Israel and Palestine, living in peace and security. He also made great strides to invest in the Saudi people, and the Kingdom's infrastructure and economic development," said U.S. Secretary of State John Kerry.

U.N. Secretary-General Ban Ki-moon also extended his condolences following the death of King Abdullah. Praising his leadership and development to the Kingdom, the office of the Secretary-General released a statement that read, "Under his leadership over many decades in different high-level positions in government, the Kingdom of Saudi Arabia achieved remarkable progress and prosperity for its people. The Secretary-General pays tribute to King Abdullah's efforts to address regional and international challenges at a time of turmoil and rapid change, and to promote dialogue among the world's faiths."

According to Ki-moon, King Abdullah left a tangible legacy that can still point the way toward peace in the Middle East as a driving force behind the Arab Peace initiative.

Egyptian president Abdel-Fattah el-Sissi said that the Kingdom and the Arab nations have lost a leader of its best sons. King Abdullah supported the 2013 military coup in Egypt when he toppled the first democratically elected president Mohammed Morsi. Meanwhile, Egypt announced seven days of mourning for the death of the king.

Expressing his sorrow over the death of King Abdullah, Nawaz Sharif said that Saudi Arabia has a very special place in the hearts of the Pakistani people since the country is a custodian of two of the holiest places in Islam: Mecca and Medina.

Extending his deepest condolences to Saudi Arabia and the family of King, Afghan President Ashraf Ghani said, "Afghans will always remember King Abdullah as a great supporter of their jihad. He always supported the Afghan peace process."

Iranian President Hassan Rouhani said: "I wish a peaceful rest for the late King, patience for his family and success for the people and the government of Saudi Arabia."

German chancellor Angela Merkel extended her condolences and said that King Abdullah's policies "brought him and the Kingdom of Saudi Arabia respect and recognition. With wisdom, foresight and great personal dedication, he strove for a cautious modernization of his country and for dialogue between the Islamic world and the West."

Israeli President Reuven Rivlin also expressed his sadness to hear of the king's death, and defined him as an example of grounded, considered and responsible leadership with a deep religious tradition. "As the 'Guardian of the Holy Places' of Islam, King Abdullah acted as a moderator, respecting the sensitivity and sanctity of Jerusalem and sought to promote a vision of prosperity for the region. His wise policies contributed greatly to our region and to the stability of the Middle East," said the Israeli president.