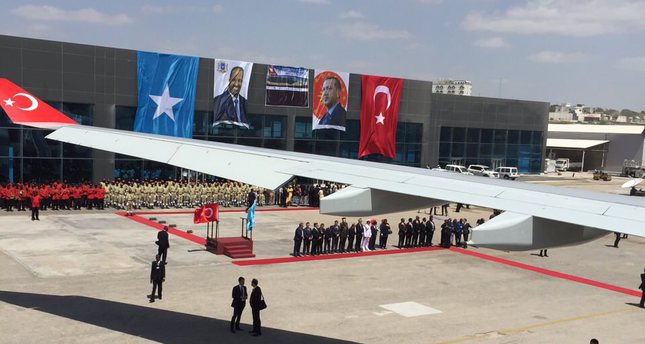 by Serdar Karagöz Jan 25, 2015 12:00 am
Turkish President Recep Tayyip Erdoğan arrived in the Somali capital, Mogadishu, on Sunday as part of his official visit to the Horn of Africa.

The two countries signed a protocol stipulating that the hospital would be operated jointly and that the Turkish Health Ministry would provide specialized personnel and financial support for the next five years, after which the hospital will be run by Somalia.

The estimate amount of the hospital's operating budget is around $135.7 million, of which Turkey will contribute $85.6 million during the five-year period.

Some 36 Somali assistants are expected take part in the hospital's training program each year.

Some 52 Turkish and 91 local staff will work as hospital administrators, head doctors, administrative directors or financial directors. Security will be provided by 40 Somalis and five Turkish citizens.

"I wish this building will bring good luck to Somalia, which has gone through hard times," he said.

Hundreds of soldiers were deployed across Mogadishu on Sunday. This is Erdoğan's second visit to Somalia.

Somali president Hassan Sheikh Mohamud lauded Turkey for investing in Somalia despite the insecurity caused by decades of turmoil, currently from a terrorist insurgency by al-Shabab, which is allied to al-Qaida. Two days ago three people died when an al-Shabab suicide car bomber detonated explosives at a hotel where the Turkish president's advance party was staying. No Turks were injured in that incident.