CHP mayor claims Sarıgül followed him to US for intimidation 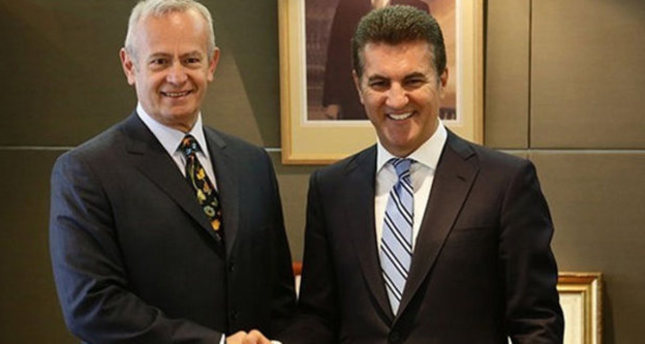 by Nurbanu Kızıl Jan 26, 2015 12:00 am
Hayri İnönü, the mayor of Istanbul's prominent Şişli district affiliated with the Republican People's Party (CHP), has claimed that Mustafa Sarıgül, the former mayor of the municipality, secretly followed him to the United States when he went to see his children to coerce him to step down.

The mayor reportedly made the statements when he returned to the prosecutor's office to elaborate on his previous testimony. He included statements which he had previously been unable to utter due to intimidation and pressure.

"When I went to the U.S. to see my sons back in November, Mustafa Sarıgül sent me a text message saying he had a 'surprise' for me and that he was coming to the U.S." İnönü said, adding that he received another message a day after asking him to "meet for five minutes." He added that on November 10, he went to the hotel where Sarıgül stayed at and met with him. According to İnönü, Sarıgül asked him to resign from his position as the mayor of Şişli as soon as possible and put two resignation letters in front of him and told him to write a new one, but the former refused to step down.

İnönü stated that he was able to take a picture of the resignation letters presented to him by Sarıgül and submitted the photos to the prosecutor's office as evidence.

It was reported that the mayor had not included this testimony before as he was concerned about his family and did not want to scare them.

İnönü also said he will complain about Emir Sarıgül, the son of Mustafa Sarıgül who served as the deputy mayor of Şişli until a crisis erupted. He said that Emir Sarıgül had given back the duty of a number of officials who were previously deposed by İnönü while he was in the U.S. He stated that Emir Sarıgül has collaborated with his father even though he did not directly threaten him.

Internal conflict within Turkey's main opposition party, CHP, was brought to the attention of judicial authorities when the Counter-Terrorism Department within the Public Prosecutor of Istanbul launched a probe to investigate Nazlı İnönü's - the wife of Şişli's mayor Hayri İnönü - claims about Şişli's former mayor Mustafa Sarıgül, who allegedly threatened İnönü and his family by intimidation through a mafia.

The conflict in Şişli municipality erupted when Emir Sarıgül moved the municipal headquarters to a building in Okmeydanı district. Hayri İnönü claimed he was denied entry to the new headquarters, which was interpreted by many as a move to establish a coup d'etat in Şişli by Mustafa Sarıgül to take over.

Emir Sarıgül, who served as the deputy mayor of Şişli before the crisis erupted, resigned in December. The resignation came following a shuffle in the municipal administration by Hayri İnönü, which removed Sarıgül's administrative powers.