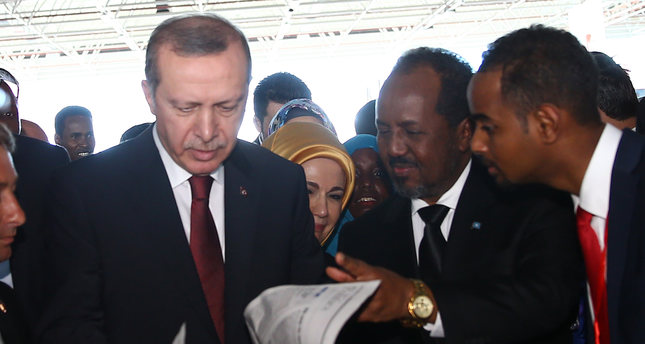 by Serdar Karagöz Jan 26, 2015 12:00 am
President Erdoğan said Turkey has become one of the most generous aid givers in the world, and as it became stronger, the amount of help given to ensure peace and stability would increase accordingly.

Erdoğan noted that Turkey's African initiative had begun in 2005, which was declared the "Year of Africa." "The process that begun then is now transformed into partnership with Africa. When we [Justice and Development Party – AK Party] came to power 12 years ago, we had 12 embassies in Africa. As of today, we have 39 embassies. Then, there were almost no African embassies in Turkey. Now there are 31. I believe they will soon catch up.

"Another thing that I find important to note is the fact that when we came to power, bilateral trade with Africa stood as $3 billion. Now it has reached $36 billion. This shows how positive bilateral ties between Turkey and African countries are. Currently, Turkish Airlines [THY] flies to 40 urban centers in 30 African countries," he said.

He said Turkey's decision to extend a helping hand to Somalia had angered certain circles. "They are pressuring the Somali government. They forced a delay of three years to the building of a harbor in Mogadishu. We insisted and a Turkish firm, Albayrak, built it. Thanks to that harbor, Somalia earns $2 million a month. If it had been built three years ago, it would have meant a serious infusion of capital into their economy. Soon after we went to Somalia in 2011, the U.K. government wanted to hold a meeting. We told the U.K. not to discuss the country from afar but to go there and see it. They didn't. Western countries don't even build embassy buildings there. They execute their consular duties from simple containers."

He said everyone who followed Somalia knew about the contributions of Turkey. "God willing, when Turkey also overcomes certain obstacles and becomes stronger, it will be able to provide more help. As of end of 2002, Turkey was giving $45 million in aid to poor countries. Now, our support has reached $4.5 billion."

When asked if Turkey was exceeding its own limits by providing so much aid, Erdoğan said, "We are performing a duty in accordance with our genes and forefathers. Some rich countries don't help at all. Think about the oil countries and some Muslim countries. If they gave Somalia just one 40th of what they earn from selling oil, which is commanded by Islam, there would be no poverty in Somalia."

He also said that Turkey could not allow Somalians to fall victim to terrorism. "We won't abandon our Somali brothers and sisters just because a few terrorists said so. Those who perpetrate terrorism cannot be linked to humanity or Islam. Why do we go to Somalia? We are going there to inaugurate the facilities we built to serve the people of Somalia. We also went there to talk about what we are planning to do in the future. Anyone who loves Somalia and the Somalis should welcome us.

"I believe our stance there was a serious message to Somalis and those who support terrorist attacks. As you saw in all the side streets, there were serious security precautions taken. If it hadn't been for them, you would have seen a million people attending the inauguration ceremonies," the president said.