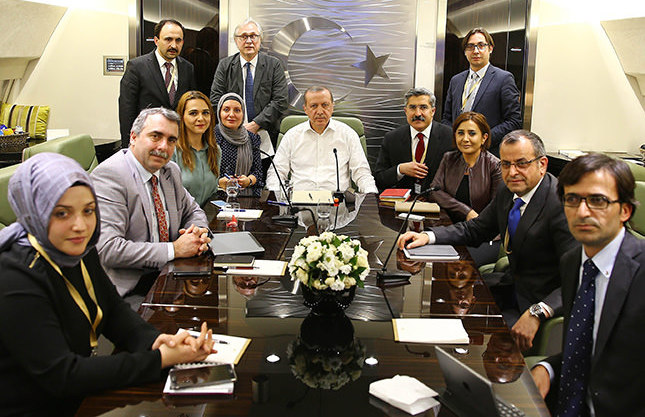 A switch from a parliamentary to a presidential system would allow the smooth running of the state apparatus and allow for a more efficient decision-making mechanism, says President Erdoğan

President Recep Tayyip Erdoğan, speaking to journalists accompanying him during his four-day African tour that included visits to Ethiopia, Djibouti and Somalia, said that in order for Turkey to become stronger, it needed to shift from the parliamentary system to a presidential one.

President Erdoğan noted that he has been in support of a switch to a presidential system since the late 1990s when he served as Istanbul's mayor. When asked whether there could be any differences of opinion with the government, he said he believed Prime Minister Ahmet Davutoğlu agreed with him on the issue.

Erdoğan pointed out that Davutoğlu had served as his foreign policy advisor and then foreign minister in cabinets headed by him, adding, "Since the beginning, we have been commending the benefits of a presidential system at rallies. Even during the presidential elections, we endorsed such a switch. I don't expect any disagreement on the matter between the prime minister and myself."

He said together with a new constitution, the system of government, was one of the main points of discussion between the two leaders. He said he believed a presidential system would be one of the principle topics of debate in the upcoming general election campaign.

He underlined the importance of efficiency in managing people, capital and information. "We can be more efficient. It is clear we currently are not. We need to introduce an economy based efficiency. If we do that, it will immediately produce results. Whatever we have achieved in terms of investment was accomplished by overcoming significant obstacles. If we have a presidential system, I believe we would secure much better results in terms of investments in people and infrastructure," he said.

He also dismissed concerns that a presidential system was basically antidemocratic and removed all systems of checks and balances. "It's just the opposite. The checks and balances in a presidential system are not present in the current parliamentary system we have. For example, President Barack Obama cannot move without first getting the go ahead from the U.S. House of Representatives and the Senate. It covers all decisions, from spending to other key matters. He decides to give a helicopter to a country. If it is not approved, the exchange doesn't happen. Look what happened to the health reform. Just when people thought it was done, everything was reversed," he said.

He said the necessary checks and balances should complement, not obstruct the executive branch's power. He noted that Obama had lost his sway over the Senate and the House of Representatives and the decision-making in Washington, D.C. had ground to a halt. "I believe a single parliamentary chamber, like we have now, is sufficient. Some support a dual legislative chamber system. That would harm efficiency and waste time. A strong parliament in a presidential system would allow the use of presidential powers while inspecting its use," he said.

President Erdoğan said 12 years ago when the AK Party first came to power, he had personally traveled all over Europe to improve ties and provide a boost to the membership negotiations. "At that time, the attitude of European leaders was more positive. The current ones can't even understand the EU acquis. Then, we could attend leaders' summits." However, once German Chancellor Angela Merkel and French President Nicolas Sarkozy had come to power, they passed a decision not to invite candidate members to these summits, the president noted.

He also criticized the EU's 2004 decision to accept 10 new members, which he described as political. "They didn't care whether these countries abided by the EU acquis. Greek Cyprus did not abide by the EU rules. Turkey had progressed much further."

The president said the government needed only two months to complete each chapter once the EU said it could go ahead. "But still they delay. We asked them to cooperate to build the Nabuco pipeline. They couldn't find the money. We started the Trans-Anatolian Pipeline Project with Azerbaijan. One thing is clear. If Turkey remains determined in its EU trajectory while they, sometime in the future, decide not to allow us in, I believe Turkey will go on its own and implement its own criteria."

President Erdoğan said Turkey's policy toward Syria was clear and there were no discussions on changing it.

"Our target is the regime. The Assad regime cannot be allowed to go on. Opposition groups have repeatedly said the same. I told U.S. President Obama and Vice President Joe Biden that three things had to happen before a solution could emerge in Syria. The institution of a no-fly zone, a safe zone and the training of opposition groups. The U.S. agrees on training but does not consider the other two. Moreover, it doesn't want to target the regime. Without that, there can be no solution.

Will this result in Syria becoming a second Iraq? We don't want a new Iraq. We don't want a North Syria, similar to North Iraq. We can't accept that. We, as Turkey, know we carry serious responsibilities. We need to preserve our stance. If not, another entity may arise in the north of Syria, just as it did in Iraq. Such entities will create serious problems in the future," he said.

He also said he couldn't understand why the U.S. saw Kobani as a strategic region while ignoring Aleppo. "I asked President Obama why Kobani was so strategic," he said and added that Obama's response that if the Islamic State of Iraq and al-Sham (ISIS) emerged as the victor in Kobani , it would promote it as a victory over the coalition. Turkey had told the U.S. the fact that there was no civilian population remaining in the Kobani region, said the president. "We warned them not to drop arms. Unfortunately, they went ahead and sent three C 130s and dropped arms." Erdoğan said half of the arms were seized by ISIS.

He said Aleppo was important for Turkey. "1.2 million people still live there. The regime is constantly bombing it. There is culture and civilization there. I hope Americans will rethink their strategy," he said.