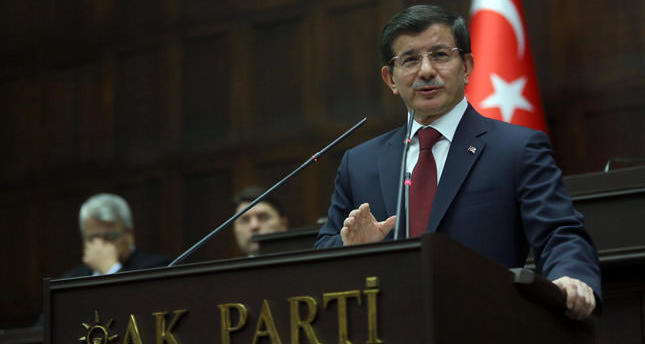 Following his election victory, Prime Minister Davutoğlu congratulated his counterpart Alexis Tsipras, the new prime minister of Greece, and invited him to Ankara to strengthen bilateral relations between the two neighbors

Prime Minister Ahmet Davutoğlu called Greece's newly sworn in Prime Minister Alexis Tsipras to congratulate him on his party's victory in Sunday's elections and the formation of a new coalition government and invited him to Ankara.

Davutoğlu wrote on his official Twitter account on Monday: "I've just called and congratulated the new Greek Prime Minister Alexis Tsipras." He also said he hoped that the new term would be beneficial for both Greek citizens and relations between Greece and Turkey.

Earlier, the 40-year-old leader of the Coalition of the Radical Left (Syriza) took the oath of office before President Karolos Papoulias in Athens, making him the youngest prime minister in the country's history. The ceremony came hours after the conservative Independent Greeks party agreed to form a coalition government with the winners of Greece's national elections.

Tsipras was sworn in as Greece's prime minister on Monday and is set to lead an anti-austerity coalition after a stunning election win that sent shockwaves through Europe. Tsipras's decisive victory in Sunday's vote set the country on a collision course with international creditors over plans to renegotiate its massive bailout deal. His radical left Syriza took 149 out of the 300 seats in parliament, becoming the first party to take power in Europe that openly rejects spending cuts and austerity measures.

Having fallen two seats short of an absolute majority, the leftists quickly forged a coalition with the small right-wing Independent Greeks (ANEL).

The new cabinet was expected to be announced and sworn in after Daily Sabah went to print on Tuesday evening. At his swearing-in ceremony Tsipras, characteristically wearing an open-necked shirt without a tie, broke with tradition by taking a civil instead of a religious oath. His first priority will be to deliver on his pledge to renegotiate the terms of the country's 240-billion euro EU-International Monetary Fund (IMF) bailout despite universal opposition from Greece's European allies.

Renewed fears that Greece could be forced out of the eurozone if it defaults on its debt repayments saw the euro hit an 11-year low against the dollar and Greek stocks closed down more than three percent.

The IMF on Monday extended an olive branch to the new Greek government, saying it was prepared to continue its financial support for the country.

"We stand ready to continue supporting Greece, and look forward to discussions with the new government," IMF Managing Director Christine Lagarde said in a brief statement.

"There is no urgent need for action" on Greece's debt, Juncker told German television station ARD, adding that a reduction of the debt "is not on the radar. Tsipras said Sunday his victory would see Greece "leaving behind disastrous austerity" and was a "mandate for national rebirth" after the "humiliation" of years of painful austerity.

Many Greeks were optimistic that the fortunes of a country mired in a deep recession for six years were about to change for the better. Nikos, a Syriza supporter in Athens, said: "Today is a very good day. I believe things will go well for our country." But others were skeptical. "There are many promises, but at the end there will be nothing. They only want power," Athena Mantsinou said as she walked through the capital's Syntagma Square, the scene of many anti-austerity demonstrations.