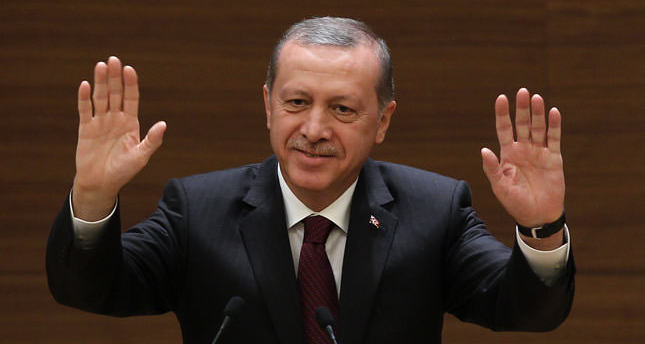 by Mehmet Solmaz Jan 27, 2015 12:00 am
After completing his four-day trip to Africa, President Recep Tayyip Erdoğan returned to Turkey and stressed that the accelerated relations with African nations will continue in various dimensions including investment, aid contributions and diplomatic ties. Erdoğan said that Turkey's presence in Africa is to only "heal the wounds" of those nations and added: "Many countries see Africa as a source of gold and cheap labor, but we see the continent with a sense of brotherhood and we are present in the countries with aid agencies and nongovernmental organizations." He later praised the efforts of Turkish doctors in Somalia and said: "The struggle of these people is above all appreciation." Commenting on the car bombing outside a hotel in Mogadishu where a Turkish delegation was staying before his arrival to the war-torn country, Erdoğan said threats and attacks would not prevent Turkey from "fulfilling its historic duty."

Speaking at a business forum in Ethiopia, he said that Turkey is trying to build not only commercial and economic ties with Africa, but also as a country aware of Africa's problems and its potential, wants to support African countries "on all platforms." He underlined that he wants to improve relations with Ethiopia in order to compensate for the 10-year gap in relations when the government's latest Africa initiative program was implemented. Erdoğan said that the program was successful and now that ties have been established they need to be strengthened by taking mutual steps. He said that with its potential and human resources, and as the host of the Organization of African Unity, Ethiopia is the center of the continent.

In August 2008 the African Union declared Turkey a "strategic partner" at the Turkey-Africa Cooperation Summit. In May 2010, Turkey hosted the 4th U.N. Conference on the Least Developed Countries, and has never looked back.

Turkey expanded its area of influence in Africa by blending soft power tactics such as transportation links, trade, education and religious services with its foreign policy. Somalia has been one of the largest recipients of aid from Turkey, amounting for hundreds of millions of dollars spent on infrastructure and various other projects since 2011. In Mogadishu, Erdoğan and Somali President Hassan Sheikh Mohamud inaugurated the Somalia-Turkey Education and Research Hospital, which has a 200-bed capacity and has been operational since September 2014. The hospital was built by the Turkish Cooperation and Coordination Agency (TİKA). In accordance with a bilateral agreement, the Turkish Health Ministry will provide funding and personnel to the hospital for five years and it will be handed over to Somalia at no charge at the end of the period. The Health Ministry will also assist the country in developing a sustainable health system and will train much-needed personnel. The ministry will also allocate around $85 million for the projected five-year upkeep and operation of the hospital. There are currently 52 Turkish nationals and 91 Somalis working at the hospital.

Prior to his Mogadishu visit, president Erdoğan paid an official visit to Djibouti. Speaking at the country's National Assembly, where he said that Turkey would provide scholarships for 3,500 African students studying in Turkey.