KRG thanks Turkish officials for their role in freeing Kobani 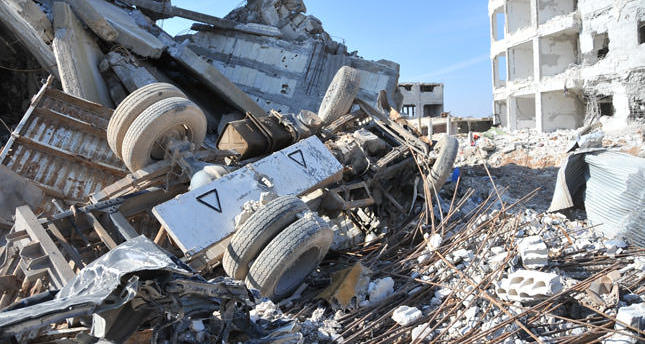 Leaders of the Kurdistan Regional Government commended President Erdoğan and Prime Minister Davutoğlu for their help in saving Kobani from the clutches of ISIS, which is gradually being pushed further back from the town

Kurdistan Regional Government (KRG) Prime Minister Nechirvan Barzani yesterday thanked President Recep Tayyip Erdoğan and Prime Minister Ahmet Davutoğlu for their roles in aiding the forces that fought back the Islamic State of Iraq and al-Sham (ISIS) from the northern Syrian town of Kobani after 134 days of the ISIS siege.

"I thanked Turkish President Erdoğan and Prime Minister Davutoğlu for their efforts. Had they not been so brave, peshmerga forces would have not been able to arrive in Kobani to help [Kurdish fighters in the town]. Turkey played a significant role in sheltering refugees from Kobani," Barzani said.

Expressing his gratitude to peshmerga forces and the Kurdistan public, Barzani also congratulated KRG President Masoud Barzani for his efforts helping Kurdish forces in the town.

Noting that Kobani is a symbol in the fight against ISIS, the prime minister Barzani hoped that all surrounding areas around Kobani would be saved from ISIS.

He further thanked the U.S.-led anti-ISIS coalition and its support in the Kobani fight.

He also thanked Turkey for its role in helping to "free" Kobani from ISIS militants. A statement released on the KRG presidential website on Monday touched on Turkey's allowing Kurdish peshmerga forces to cross from Iraq into Kobani through Turkey.

News that ISIS has been beaten back from Kobani and that the town is now under the control of the Democratic Union Party (PYD) has been celebrated by Kurdish groups in the Turkish provinces of Istanbul, Diyarbakır, Batman, Şırnak, Siirt and Mardin. Groups lit fireworks, danced to music and cheered.

Even though the town is under the control of Kurdish forces, a monitoring group reportedly said that there are still clashes between ISIS militants and Kurdish forces outside the town.

Erdoğan also commented on the Kobani reports on Tuesday and asked what would happen to the 200,000 civilians who left Kobani due to the ISIS threat and where they would live if they went back to Kobani since it was completely devastated during the battle.

Reiterating the claims that Syrian regime forces committed massacres in and around Aleppo, Erdoğan called on the international community to not turn a blind eye to the human tragedy and said there are 1.2 million civilians living there.

Aleppo, Syria's most populous city before the war, has been split roughly in half between opposition groups in the east and government troops in the west.

He further criticized turning Kobani into the focal point of the world while there are hundreds of people who live with the lack of security around the world.

Kobani started to occupy the entire world's agenda when it fell into the hands of ISIS militants in the autumn of 2014, pushing thousands of civilians to flee to the closest safety in Turkey, leaving their everyday lives and belongings behind.

During the 134 days of battle in Kobani, which turned into a symbolic town in the fight against ISIS, Turkey stepped into support the fortification of Kurdish forces by allowing Iraqi KRG peshmerga forces to cross into Syria through Turkey in accordance with the ratification the October 2 troop mandate by Parliament. Several fresh batches followed the first peshmerga forces on a regular basis in an attempt to relieve the Kurdish forces battling ISIS. Along with the peshmerga forces, Ankara also allowed convoy groups including heavy weapons to pass into the town. A group from the Free Syrian Army (FSA) was also allowed to pass into the town to help Kurdish forces.

In the four-month of the Kobani battle, the U.S.-led coalition carried out airstrikes on ISIS to relieve the Syrian Kurdish fighters in Kobani, especially the PKK's Syrian wing, the PYD and its armed People's Protection Units (YPG). The U.S.-led coalition resupplied the YPG and came under fire for providing material aid to the group from Turkey.

The ISIS siege of Kobani turned into a test for the U.S.-led anti-ISIS coalition, which began launching military strikes in early October to halt ISIS advances. The coalition has conducted over 150 airstrikes on ISIS militants besieging the town. According to U.S. officials, the airstrikes have killed hundreds of ISIS militants.

Ankara has been strongly against supporting what it sees as a terrorist organization given that the weapons provided to the organization could, under certain circumstances, later be used against Turkey. After the U.S. gave a cold shoulder to Ankara's concerns about supplying Kurdish fighters with weapons, insisting on providing the YPG with arms and supplies, the Turkish government came up with a new strategy of sending KRG peshmerga forces to Kobani to help in the fight against ISIS.

The arrival of peshmerga forces and FSA fighters in Kobani provided critical military assistance in the fight against ISIS militants in the town. Despite the PYD's reservations and cool stance toward the arrival of the two groups, Kurdish groups in Syria appeared to be forming unity to fight ISIS, which they considered a bigger threat, for the first time since the outbreak of chaos in the region. According to regional experts, the rivalry between Kurdish groups with political differences will continue even though they managed to turn the tide in Syria and broke the ISIS siege.

Another issue is that Turkey has extended a helping hand to Kobani when the country opened its borders to refugees fleeing Kobani in September. Turkey witnessed the highest influx of refugees of the four years of the Syrian civil war with Syrian Kurds who were displaced from their homes.

Nearly 200,000 Syrian Kurds fled to Turkey since September, escaping from ISIS attacks on Kobani. Most of the refugees have been sheltered in the town of Suruç in the southeastern province of Şanlıurfa, which is close to Kobani as some Kobani refugees have been living with their relatives in the town. Turkish agencies such as the Disaster and Emergency Management Agency (AFAD) and Turkish Red Crescent provided their services on a daily basis. On January 26, Turkey opened its biggest refugee camp in Suruç to shelter 35,000 people fleeing the fight against ISIS militants in Kobani.