We closely engaged with Turkey in ISIS fight, says Psaki 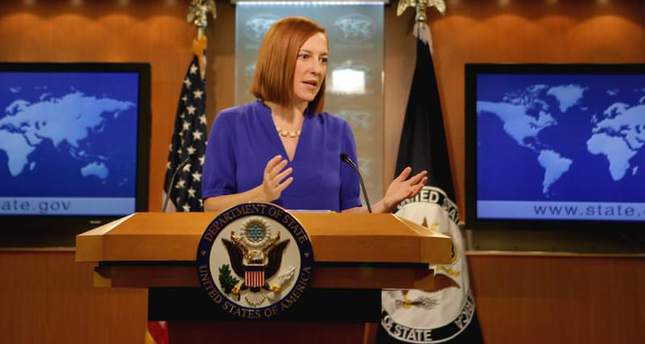 by Sena Alkan Jan 27, 2015 12:00 am
U.S. State Department spokeswoman, Jen Psaki, said at a daily press briefing on Monday that Washington has been very closely engaged with Turkey in the fight against the Islamic State of Iraq and al-Sham (ISIS) in the region.

"I don't know the number of trips that [the head of anti-ISIS coalition] General Allen and [U.S. Ambassador to Iraq Brett] McGurk have taken there and the number of times they've engaged with our Turkish partners. They have contributed in every line of effort, so we certainly feel good about our ongoing cooperation, which is not just about one area but is about this entire effort to defeat [ISIS]," Psaki said.

When asked about the reports that Kurdish fighters seemed to have chased ISIS out of the northern town of Kobani, Syria, Psaki said, "Kobani remains contested."

She further added that the U.S. continues to support local forces contesting ISIS territory and added, "Anti-[ISIS] fighters now control approximately 70 percent of the territory in and near-Kobani, and certainly that is progress being made. As we all know, [ISIS] has put a great deal of resources into Kobani. They're clearly not succeeding and we are pushing them back. But I don't have confirmation fully of it being a complete process."

Regarding the interview given by Syrian President Bashar Assad to a magazine in the U.S., Psaki said that Assad had lost his legitimacy.

"The delusions that Assad presents here only reinforce our firm belief that he long ago lost all legitimacy and must go. There can never be a stable, inclusive Syria under his leadership," Psaki said.

She said in response to Assad's statements in the interview regarding systematic killings in Syria: "… [Assad] seemed to deny the existence, or the sufficiency of the Caesar photos, that he denied or didn't seem to be aware of, but kind of conveniently forgot the fact that tens of thousands of people have died in his country on his watch is, I think, all we needed to know and all the international community needed to know."

She further stressed that there is no change in Washington's stance on the Assad regime.