Gülen was planning a Khomeini-style return after coup, says minister 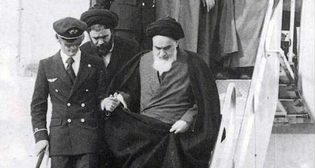 Justice Minister Bozdağ said that the leader of the Gülen Movement would return to Turkey from the US if the movement obtained its goal of toppling the government, likening the potential move to that of Khomeini whose return to Iran from exile changed the fate of the country permanently

Justice Minister Bekir Bozdağ has claimed that if the "parallel structure within the state" had not been discovered during the Dec. 17 operation, which was allegedly orchestrated by the Gülen Movement in an apparent attempt to topple the government, the leader of the movement, Fethullah Gülen, would have returned to Turkey from the U.S., where he lives in exile "just like Ruhollah Khomeini returned to Iran."

In a question and answer session he held with the editors of Anadolu Agency, Bozdağ made striking comments about the "parallel structure," a term that the government officially coined in reference to the Gülen Movement and offenses they have allegedly been engaged in. During the interview, Bozdağ claimed Gülen, who currently lives in exile in Pennsylvania, could have returned to Turkey, likening the possible move to that of Khomeini when he became the leader of the 1979 Iranian Revolution that saw the overthrow of Mohammad Reza Pahlavi, the Shah of Iran after 14 years of exile.

Previously, Latif Erdoğan, once a close companion of Gülen and now a strong dissident, said the operations that were conducted on December 17 and December 25 were an attempted coup and that all efforts to infiltrate state institutions have the primary purpose of forming an Islamic state led by a modernized caliphate. He further claimed that if the operations had been successful, Gülen would have come back to Turkey from the U.S.

Bozdağ also underscored the threat posed by the movement extending to launching an investigation into "a minister of the Turkish Republic" on suspicion of involvement in terrorism.

"A prosecutor tasked with looking into cases of terrorism launched a probe about me. Think about it, there is a mindset here that can deem a justice minister [of a state] a terrorist. Could something like that happen?" Bozdağ asked rhetorically, expressing astonishment over the matter.

He continued by unveiling other alleged irregularities of the "parallel state," claiming his orders were complied with only if they suited the benefits of high-level members of the Gülen Movement. Pointing to the infiltration that Gülenists were allegedly involved in, Bozdağ said: "Think about it: A minister gives an order to a consultant and heads to an imam [from the Gülen Movement] to ask whether it is apt to comply with that order. This does not match with a democratic and lawful state."

The Gülen Movement is considered to be a national security threat by Ankara. President Recep Tayyip Erdoğan has since accused the movement of wiretapping thousands of people, including government officials, encrypting phones and allegedly infiltrating state institutions, including the judiciary and security forces, with the aim of overthrowing the government. Erdoğan previously said that the movement will be included in the Red Book and that fighting against the organization through lawful means will be one of Ankara's priorities.

Touching upon the issue of extradition, Bozdağ said, "Turkey expects the U.S. to honor bilateral agreements and extradite Gülen."

"As two allies, the U.S. and Turkey are cooperating in many fields, including mutual legal assistance. I believe they will respond positively if Turkey decides to extend a request for Gülen's extradition," he added.

About the recent draft bill to replace Gülen schools functioning across the world, discussions about which are under way in the Cabinet, Bozdağ implied that the government deemed it necessary to adopt precautions over a movement that propagates defamatory views about Turkey abroad and carries out activities against it.

"We witnessed how people who we long thought were engaged in religious and educational matters were involved in anything but the two. Wouldn't you take measures against a movement that conducts activities against Turkey?" Bozdağ asked.