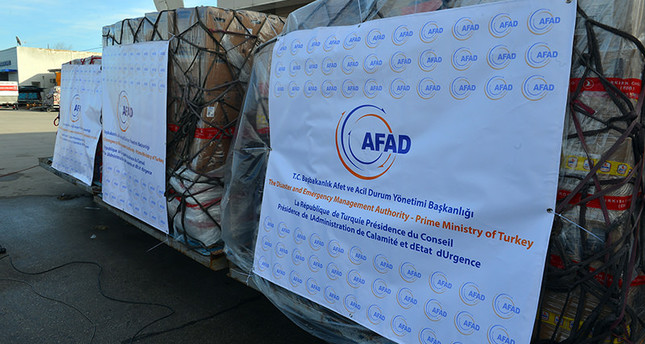 by Sena Alkan Jan 30, 2015 12:00 am
Turkey continues to extend its helping hand to those who are in need around the world through its state-run agencies. In its latest effort, the Disaster and Emergency Management Presidency of Turkey (AFAD) delivered medical aid to the West African countries of Guinea, Sierra Leone and Liberia, which have been seriously affected by the Ebola outbreak.

In his comments to Daily Sabah, AFAD spokesman Doğan Eşkinat said, "We are proud to contribute to the West African effort to end the Ebola outbreak. AFAD has coordinated Turkey's response to humanitarian crises and emergencies in nearly 50 countries."

Portraying Turkey as a regional power with a global reach, Eşkinat said that it is not possible for the country to remain indifferent to any part of the world.

AFAD said in a statement that the value of the 150-ton aid package consisting of medicine and medical equipment for the three countries is TL 2.53 million ($1.067 million). The first batch of aid arrived in Guinea's capital, Conakry, on January 25 on Turkish Airlines (THY), the first time that the THY has flown to Guinea. The second batch reportedly arrived in both Sierra Leone and Liberia on Friday. In a ceremony held in Ankara on January 28 ahead of the shipments, Kurtulmuş underscored that Turkey stands with the African people not only in the face of the Ebola crisis, but also against civil wars and famine.

"This is our conscientious duty," Kurtulmuş added.

He also heralded the fact that the spread of new Ebola cases is declining, but also warned that the crisis on the African continent, especially in Central Africa and West Africa, is still a serious threat.

According to a report issued by the World Health Organization (WHO) on January 29, the death toll from the Ebola outbreak in the three worst-hit countries in West Africa had climbed to 8,818 as of January 26.

Updated figures on the WHO website state that there are 22,101 cases that have been recorded, and 13,686 of them are laboratory confirmed cases in those countries.

The viral hemorrhagic fever was first detected in the southeastern forest region of Guinea in 2014 before spreading to neighbors Liberia and Sierra Leone, which now have the highest number of infections, according to the WHO.

Here is the timeline of key dates in Ebola outbreak based on the latest feature map issued by WHO:

December 28, 2013: A baby boy dies of a yet-unidentified hemorrhagic fever in southeastern Guinea. His family dies only weeks after of the same disease, Ebola.

March 23, 2014: The Guinean government announced an outbreak of Ebola virus disease in Guinea.

March 29, 2014: The Ministry of Health of Liberia confirms its first cases of Ebola virus disease.

May 26, 2014: Sierra Leone closes its borders after five people die.

July 27, 2014: The Ministry of Health of Nigeria confirms its first case of Ebola virus disease.

July 29, 2014: Dr. Sheik Umar Khan, who is the head of Sierra Leone's Ebola fight and infected while treating patients, dies of Ebola.

August 2, 2014: A U.S.-based doctor who was infected by Ebola while working in Liberia is taken to the U.S. for treatment and he is the first Ebola patient treated in the western hemisphere.

August 8, 2014: WHO Director-General Margaret Chan sheds light on the severity of Ebola outbreak in a statement: "This morning I am declaring the current outbreak of Ebola virus disease a public health emergency of international concern."

October 6, 2014: A nurse in Madrid - who treated a Spanish missionary who died of Ebola in Spain after contracting it in Africa - is the first confirmed case of human-to-human transmission of the disease in Europe.

October 21, 2014: The WHO announced a vaccine might be available in January.