Erdoğan: Turkey’s success story could have been brighter with a presidential system 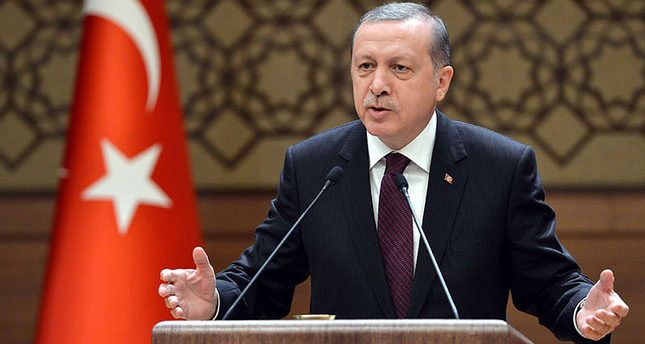 by Mehmet Solmaz Jan 30, 2015 12:00 am
After drawing attention to the economic and social developments during his leadership for the past 12 years in Turkey, President Recep Tayyip Erdoğan said the country could have achieved more if a presidential system had been adopted.

A new presidential system has been an issue as the country is getting closer to the general election in June 2015. However, Erdoğan mentioned that the discussions of switching the system had been debated during the time of former presidents Turgut Özal and Süleyman Demirel, too.

Erdoğan brushed off criticism that he is trying to amass powers like a sultan, saying that leaders of presidential systems in the U.S., Brazil, South Korea and Mexico are not accused of acting like monarchs. "I mean, why is it only a monarchy when an idea like this is mentioned in Turkey?" Erdoğan asked. "We need to speed up to close the gap in this race," he said, "The biggest advantage … would be in abolishing policymaking through multiple channels."

Speaking to journalists accompanying him on his four-day African tour last week, which included Ethiopia, Djibouti and Somalia, Erdoğan said that in order for Turkey to become stronger it needed to shift from the parliamentary system to a presidential one. He said that the biggest advantage a presidential system would bring was the elimination of a multi-headed decision-making mechanism. Swift decision-making would reflect in rapid implementation. "We would be deceiving ourselves if we said our current decision-making mechanism allows us to act swiftly," he argued.

He also dismissed concerns that a presidential system was basically anti-democratic and removed all systems of checks and balances. "It's just the opposite. The checks and balances in a presidential system are not present in the current parliamentary system we have. For example, U.S. President Barack Obama cannot move without first getting the go ahead from the House of Representatives and the Senate. It covers all decisions from spending to other key matters. He decides to give a helicopter to a country. If it is not approved, the exchange doesn't happen. Look what happened to health reform. Just when people thought it was done, everything was reversed," he said.

In the interview Erdoğan also said that after the June election the priority of the political agenda should be the drafting of a new constitution. "A new constitution is a must for a new Turkey," he said. A constitutional amendment or a new charter is needed to set up a presidential system in Turkey. The country's current Constitution was drafted two years after a military takeover in 1980 and numerous amendments have been made since then. Erdoğan is the first president to be elected by popular vote in the country. Prior to that, he was the country's prime minister for 11 years.

Touching on the economic crisis and the new government in neighboring Greece, President Erdoğan said that newly-elected Greek Prime Minister Alexis Tsipras, should use his tenure carefully to see continued support from the Greek people.

"Politics does not go well with sensitivity, and you should balance populism and politics," said Erdoğan.

The Turkish president also said that the bilateral relations between Turkey and Greece are smooth as always, and added: "I believe that we will bring Turkish Greek relations to an ideal point [with the new Greek government]."

Turkey won't rebuild Kobani on its own

President Recep Tayyip Erdoğan touched on the freeing of the northern Syrian town of Kobani from the Islamic State of Iraq and al-Sham (ISIS) and said, "We [Turkey] are sheltering all those innocent people who ran away from there [Kobani]."

Erdoğan said that the cause of the destruction was the air operations, and pointed to Turkey's calls for a ground operation. He added that it is necessary to rebuild the town, considering the nearly 200,000 Kobani refugees, but Turkey will not attempt to renovate the town on its own.
Noting the Syrian regime's attack on Aleppo, Erdoğan said that while people raise their voice when it comes to Kobani, they prefer to be silent with regard to the attacks on Aleppo.

He added that the anti-ISIS coalition-supported Democratic Union Party (PYD) is a Syrian wing of the outlawed PKK, which took up arms against Turkey to carve out a separate state in southeastern Turkey.

"Against who will they [PYD] use the heavy weapons the anti-ISIS coalition gave them?" asked Erdoğan.

President Recep Tayyip Erdoğan addressed the issue of the Gülen Movement, which is accused of infiltrating state institutions with the aim to control the state and overthrow the government.

Erdoğan said if the U.S. wants to describe its relations with Turkey as a "strategic partnership" then it should do its part and deport the controversial U.S. based imam, Fethullah Gülen. "The organization's leader, who is included on the list of national security threats, should no longer be kept in the U.S.," he added.

Erdoğan described the group as an illegal organization that has conducted illegal activities under guise of legality. "This is not an ordinary fight, but a serious issue. They are a treacherous network," he stressed. The Gülen Movement is seen as a national threat by the government, as the movement is accused of wiretapping thousands of people including government officials and encrypting phones.