EU Minister: Tourism has the potential to overcome prejudice 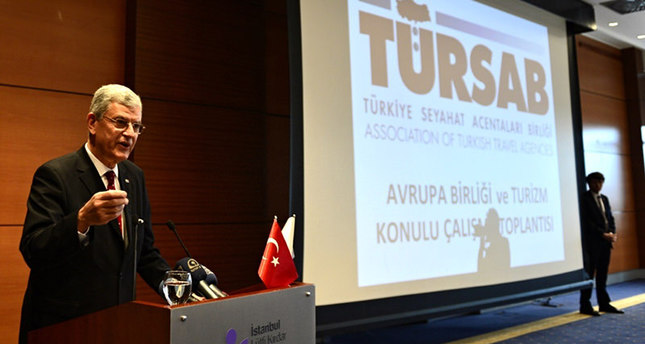 by Anadolu Agency Jan 30, 2015 12:00 am
Turkish Minister of European Affairs Volkan Bozkır said on Friday that tourism has the potential to overcome "prejudice" against the country in Europe.

"Tourism is critical to Turkey's bid for EU membership," said Bozkır who was speaking at a conference held by Association of Turkish Travel Agencies in Istanbul.

Bozkır said: "Each tourist that visits Turkey will have an opinion about us and overcome the prejudice against Turkey when they get back to their country."

"The EU has created a bad image of Turkey due to misinformation in recent years, but tourism can fix this," Bozkır claimed.

According to a World Tourism Organization 2014 report, Turkey ranked as the sixth most popular destination, managed to attract 5.5 percent more tourists last year compared to the previous year despite political and geopolitical crises around the region.

The number of people visiting Turkey as tourists reached an all-time high of 37 million in 2014.

Bozkır said the EU needs Turkey as Turkey needs the EU: "In two years Turkey will be ready to be a member of the EU. We will have all the chapters closed in two years' time," he added.

To gain membership, Turkey has to successfully conclude negotiations with the EU in 35 policy chapters, which involve reforms and the adoption of European standards.