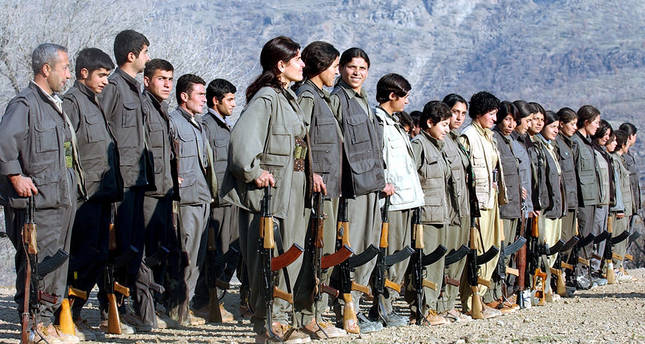 The government, which has invested significant political capital into the reconciliation process, now expects jailed PKK leader to do the same and call on his group to lay down arms this spring, says deputy PM

Following almost three years of reconciliation, the government has called on the PKK's jailed leader, Abdullah Öcalan, to demand that the organization's armed wing in northern Iraqi bases disarm as a crucial attempt to bring a final resolution to the process. Speaking at an interview with the A Haber news channel, Deputy Prime Minister Yalçın Akdoğan, the Cabinet member who regularly holds talks with the Peoples' Democratic Party (HDP) on the Kurdish issue, said that after telling the PKK to put their arms aside to hold reconciliation talks, it is now the time for Öcalan to call on the organization to lay its arms down in his speech during Nevruz celebrations on March 21.

On the same day, HDP's Diyarbakır deputy Altan Tan criticized his party for being a "postman" between Öcalan and PKK seniors in the Qandil Mountains in Iraq and called for original contributions to the reconciliation process. "We shouldn't have accepted to be a postman between İmralı and the Qandil Mountains," he said, and added that the first condition of the reconciliation process will be through representation in Parliament.

After announcing its participation in the June general elections as a party rather than nominating independent deputies, the HDP is expected to push for the idea of furthering the reconciliation process to pass the 10 percent threshold. The HDP has recently shifted its strategy as the June general election in Turkey approaches. HDP Co-Chair Selahattin Demirtaş recently met with numerous religious leaders from the Islamic-wing in Turkey, a move that the HDP hopes will enable it to pass the threshold. While the Kurdish population in Turkey is nearly 20 percent, the HDP-nominated independent deputies only received around 6.5 percent of Kurdish votes in the recent elections.

Akdoğan also drew attention to the regular negative approaches by the military wing of the PKK in the Qandil Mountains and provocative attacks by its youth wing in Turkey's mainly Kurdish-populated southeast. These moves undermine Öcalan's calls to contribute to the reconciliation process, but he still has a significant impact on the organization, Akdoğan added.

Commenting on the HDP leader's calls last October for their supporters to take to the streets in support of Kobani, which turned into violent clashes that left over 40 pro- and anti-PKK Kurds dead, Akdoğan said the reconciliation process was in a state of "turbulence," but talks have started to continue after a short while when the HDP delegation sat with the government to continue the process.

"Rather than focusing on what others are doing, people should focus on keeping their end of the bargain. The government established a parliamentary reconciliation commission and a Wise Men Committee to work on the process. It also brought this issue to a legal ground with a law it passed in Parliament in September. So, what has the other side done?" Akdoğan asked.

"The government will never tolerate kidnappings, road blocks, violent attacks and threats by the PKK and its affiliates," Akdoğan said, adding that the government would not allow any organization to adopt a stance in which its aim is to share power in a region. Thus, a "security bill package" will be presented by the ruling party to tackle such security issues.

Furthermore, Akdoğan said that he thinks the HDP will not pass the 10 percent threshold and will receive around 6 percent to 7 percent of the vote in the upcoming elections. The HDP had used all means to pressure the government to reduce the threshold to a lower level but "their threats did not work and the Constitutional Court also did not rule for a decision in favor of what they were expecting."

Parliament recently passed a bill that gives its reconciliation process with the PKK a legal framework, which is a step that will advance the process. The bill, described by Öcalan as "historic," is the first time Turkey officially announced that it wants the PKK to lay down its arms and militants to rejoin their families. The reconciliation process is about putting weapons aside and choosing words, thoughts and politics, the bill said.

The government initiated the reconciliation process in efforts to resolve the issue, and talks between the government and Öcalan have proved effective with a cease-fire declared in March 2013 that ended a 30-year insurgency that has killed over 40,000 people.