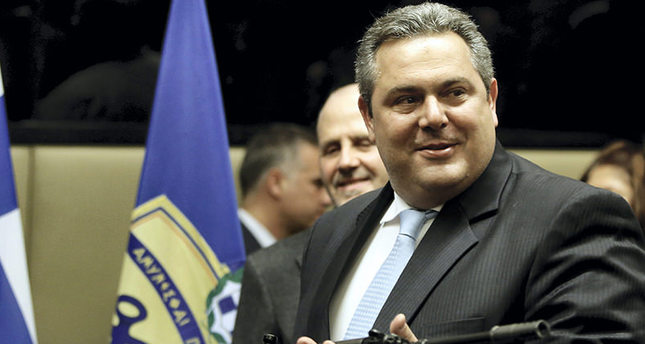 by Nurbanu Kızıl Jan 30, 2015 12:00 am
The new defense minister of Greece, Panos Kammenos is expected to leave a wreath for the sea near Kardak (also known as Imia) while he is on his way to pay a visit to Crete on Friday.

It was reported that Kammenos will travel to Crete on a helicopter accompanied by Vice-admiral Evangelos Apostolakis, the Commander of Greek Naval Forces, and will drop the wreath as he passes by Kardak, a pair of two small islets located in the Aegean Sea with no population.

It was reported that the newly appointed defense minister will attend a ceremony to commemorate the soldiers who died in the Kardak military crisis which took place between Turkey and Greece in 1995.

It is feared that the violation of Turkish airspace by Kammenos's helicopter flying above the islets while dropping the wreath may cause a new crisis and legal problems between Turkey and Greece.

Panos Kammenos is the founder of the ultranationalist, anti-austerity party "Independent Greeks" (ANEL) and is known by his firm stance against Turkey. He was appointed as the defense minister of the newly formed Greek government on Tuesday as part of the coalition, which largely objects the terms of the financial bailout package imposed on Greece.

He organized street protests during Prime Minister Ahmet Davutoğlu's visit to Athens in December when he was there for the Third Turkey-Greece High-Level Cooperation Council Summit and also blamed Greek Jews for "failing to pay taxes" –a claim which is denied by Turkish government officials.

The Kardak crisis took place in December 25 1995 when a Turkish vessel shipwrecked on the islets of Kardak. Greece claimed that the accident took place on its territorial waters, which was denied by Turkey, who claimed the aforementioned islets belong to Turkey. The Greek Military sent a soldier to plant the Greek flag on an islet in the East, resulting in the deployment of troops from both countries around the islets.

Turkey's only female prime minister, Tansu Çiller stated at the time that Turkey was ready for a military operation and sent troops to the Western islet to plant the Turkish flag, famously saying "The Greek flag will be removed and the Greek soldiers will be sent away."

Tensions were defused when then-US President Bill Clinton and American delegates and NATO Undersecretary spoke with both sides and the situation was reverted to normal.

Turkey and Greece act as representative countries for the disputed island of Cyprus to settle the decades-long conflict between Northern and Southern parts of the island.

Unlike his defense minister, Alexis Tsipras, the newly elected and youngest Prime Minister of Greece has praised Ahmet Davutoğlu's and AK Party's efforts in Turkey and has reportedly said "Although we may have different ideologies, we appreciate the work you have done in the past 13 years and want to accomplish the same in Greece."