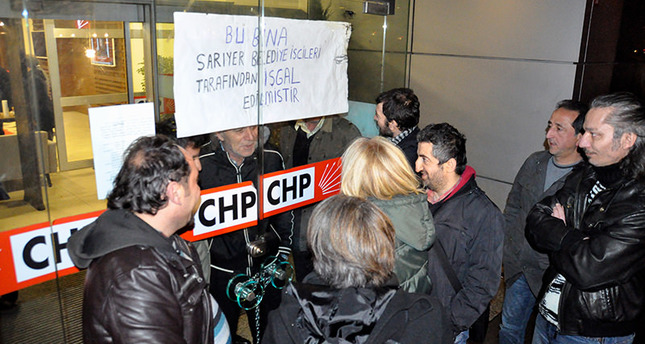 by Nurbanu Kızıl Jan 30, 2015 12:00 am
A group of municipal workers occupied the headquarters of the Republican People's Party (CHP) in Istanbul's Levent district on Thursday over claims that they were unjustly dismissed from their duties at the Parks and Gardens Directorate in the Sarıyer Municipality and threatened by the mayor for requesting to form a union.

Şükrü Genç, the CHP mayor in Sarıyer, allegedly threatened the workers, who claimed that they were phoned and warned on a regular basis to renounce their plans to join a union. The workers have said that they were not just threatened, but that the cleaning services chief in the district was also dismissed for supporting their cause.

The workers claimed that they were unjustly accused of being Justice and Development Party (AK Party) supporters who allegedly wanted to create trouble in the municipality.

It was reported that 16 workers occupied the CHP headquarters for being unjustly discharged from their jobs by the subcontractor who did not pay their termination pay despite the fact that the Sarıyer Municipality had signed an official protocol.

Posters reading "Remove the pressure on workers, pay our compensation" and "This building was occupied by workers from the Sarıyer Municipality" were hung by the workers, who expressed that they will continue to protest until they their rights are respected by the municipality and the subcontractor.

A group of people joined the workers in front of the building and supported them by chanting slogans.

A worker was quoted as saying, "They dismissed us, and we thought of holding a demonstration to seek our rights. Nobody took us seriously even though there were the necessary signatures for us to receive our compensation."

Municipalities governed by the CHP have come under fire for a number of reasons – including cutting down trees and a controversial conflict within the Şişli municipality, which is currently undergoing a judicial process – and involves serious accusations such as death threats.