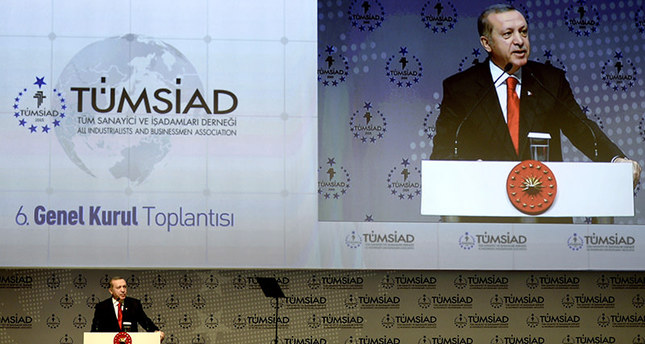 by Nurbanu Kızıl Jan 31, 2015 12:00 am
President Recep Tayyip Erdoğan has criticized the Gülen Movement, also known as the 'parallel structure' for assaulting Turkey's national security and unity by allegedly cooperating with Mossad, the national intelligence agency of Israel. He made the statements on Saturday while speaking at TÜMSİAD's (The Association of all Industrialists and Businessmen) General Assembly Meeting in Istanbul.

"Shame on the supporters of the Gülen Movement who still cannot see the cooperation between the movement and Mossad" Erdoğan exclaimed, while he distinguished the movement in terms of its senior administration and the supporter base who genuinely support the movement for its allegedly religious motives, without being aware of their hidden agenda. He underlined that the government draws a line between these two groups but it is about time the support base of the movement start questioning unlawful actions of the movement.

"It is clearly evident and obvious that the movement openly cooperates with Mossad" he said, urging everyone to analyze, contemplate and think about the actions of the Gülen Movement, which has put the national security of Turkey at stake through various incidents.

The president underlined that the Gülen Movement not only attacked him, his family and colleagues, but the nation as a whole. "Unfortunately there are people who cannot realize this" he said, reminding that the movement has unlawfully wiretapped the prime minister, president, ministers, officials from the Constitutional Court and the General Staff.

"If this is not treason then what is it?" Erdoğan asked, saying that the Gülen Movement had spied on the Turkish state through the wiretapping of top secret state meetings at the Ministry of Foreign Affairs and had served these meetings to foreign intelligence agencies, while their agents within the police and judiciary have stopped trucks of the National Intelligence Organization (MİT) bringing humanitarian aid to Turkmens in Syria and treating MİT officials in an extremely degrading and unfitting manner. Erdoğan harshly criticized the Gülen Movement for also falsely trying to portray the MİT trucks for allegedly carrying weapons to terrorist organizations even though they were carrying humanitarian aid and noted the movement can fabricate such lies without hesitance.

Erdoğan has also thanked TÜMSİAD for its contribution to the democratic struggle, while he underlined that the nation has come together and said that threats will not damage the unity and democracy in Turkey. "We love our nation and it is impossible to separate us from the nation" he said, highlighting the significance of the national will and importance of the people.

Fethullah Gülen, who lives in self-imposed exile in the United States, is accused of leading a criminal organization and officials have reported that sufficient solid evidence has been discovered proving his crimes. The movement has been under scrutiny in numerous countries including Russia, United States, Azerbaijan, Germany and more.