PM: The basis of the Republic is the people 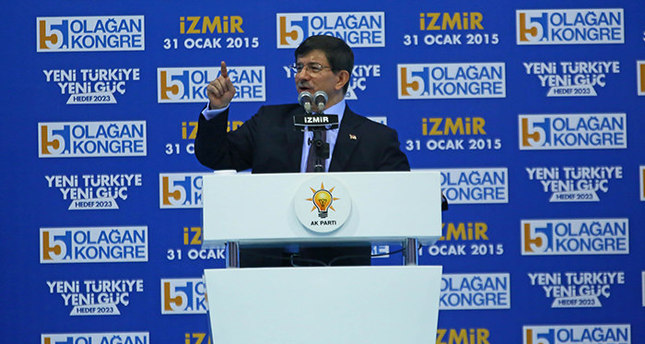 by Nurbanu Kızıl Jan 31, 2015 12:00 am
Prime Minister Ahmet Davutoğlu on Saturday has announced that the Office of the Prime Minister will open its third branch in İzmir, the city with the third largest population in Turkey. He made the announcement while speaking at the AK Party's Fifth General Congress in İzmir and emphasized the significance and true meaning of the republic and defending republican values.

PM Davutoğlu said that the AK Party will open the third branch of the Prime Ministry's Office in İzmir, and carry out some of the official meetings here as he said İzmir is a historically, geographically and strategically an important city. The two other branches are in Ankara and Istanbul.

"The basis of the Republic is the people" said Davutoğlu, and referring to the opposition parties Davutoğlu added that those who are alienated from the people and unable to embrace the nation as a whole cannot claim to be republicans.

Davutoğlu also questioned the rhetoric of fabricated republicanism promoted by opposition parties and said "If you truly want to be republicans, then you must respect the national will and democratically elected governments" as he alluded to the February 28 post-modern coup which took place in 1997 and stated that those who carried out the coup and intimidated people for their outer appearance and ideologies became members of the Republican People's Party (CHP). He underlined once again that democratically elected governments are an inseparable part of a stable democratic political system and pledged that the AK Party will continue to uphold this value.

The Prime Minister also touched upon the notion of nationalism and said that it cannot just be uttered by words and that it requires immediate action.

"Nationalism can only be espoused by political parties which vie for strengthening all aspects of the nation" he said, noting that the AK Party has economically strengthened Turkey and has brought overall political and social stability in the country through its efforts.

"Our understanding of nationalism entails bringing unity and cohesion in the country" PM Davutoğlu ended his meeting, greeting the crowd and everybody throughout Turkey.