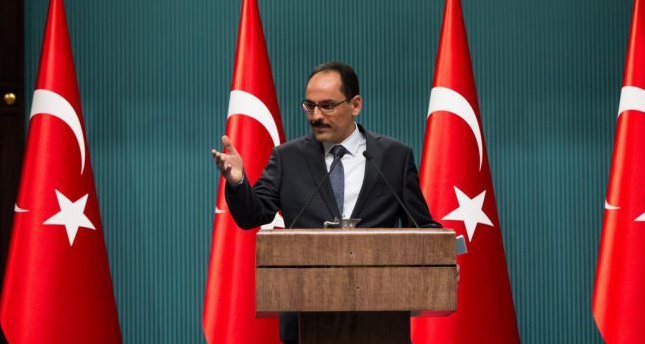 by Daily Sabah with AA Jan 31, 2015 12:00 am
Turkey's presidential spokesman has strongly condemned the remarks by Armenian President Sargsyan regarding President Erdoğan's invitation to the commemoration ceremonies in Turkey marking the 100th anniversary of the World War I Gallipoli campaign this year on 23-24 April.

"It is impossible for us to accept these expressions that target the president's invitation to Armenia and that are in contravention of diplomatic practices. We return these remarks, which are not appropriate for a leader of neighboring country and representative of the Armenian nation," Spokesman Ibrahim Kalın told Anadolu Agency on Saturday.

Kalın stated that Armenian administration conducts an international campaign against Turkey by using a hate speech, which is against all forms of diplomatic practice.

The spokesman further said: "Turkey will continue to stand against all attempts to manipulate a one-sided view of history through exploitative politicking. Our President called on historians for the establishment of a "Common History Commission" in 2005 to examine Turkey and Armenia's common history and ensured the signing of 2009 protocols that paved the way for the normalization of Turkey-Armenia relations. As a continuation of this peaceful and constructive attitude, he issued a condolence message addressing all Armenians on April 23, 2014.

"With these brave and extraordinary steps, a clear position has been established against policies based on exploiting the pain of 1915. But on every occasion, Armenia gave no response to these moves by Turkey."

Kalın also added that the Armenian government was welcoming towards neither having a fair discussion for the events of 1915 nor ending the occupation in Nagorno-Karabakh to normalize its relations with Turkey and Azerbaijan and to establish peace and stability in the region.

"This attitude is particularly damaging to Armenia and Armenians," he said.

Emphasizing that irrespective of what happened Turkey had been taking many steps for the benefit of both its Armenian citizens and the state of Armenia, Kalın said: "The long-established Turkish-Armenian friendship will continue to survive despite the provocations of radical groups."

He said that it appeared unrealistic to expect Turkey's sincere steps to be appreciated by President Sargsyan and his administration.

"The Armenian government's shallow and hateful discourse seems incapable of grasping the meaning of the Battle of Canakkale," Kalın said.

As response, Sargsyan blamed Turkey for editing its own history through marking the anniversary of the Gallipoli Battle on the day commemorating the 100th anniversary of the Armenian Genocide as he called Turkey's decision short-sighted and cynical, according to
ArmeniaNow.com.

Relations between Turkey and Armenia have historically been poor because of incidents that took place during World War I. The Armenian diaspora and government describe the 1915 events as "genocide" and have asked for compensation.

Ankara has also long been calling for Armenia and its historians to make a joint academic research and study into the archives of both countries.
In April 2014, President Erdoğan-at the time prime minister-offered condolences for the Armenian deaths that occurred in 1915-a first for a Turkish statesman.
Last Update: Feb 01, 2015 10:35 am
RELATED TOPICS