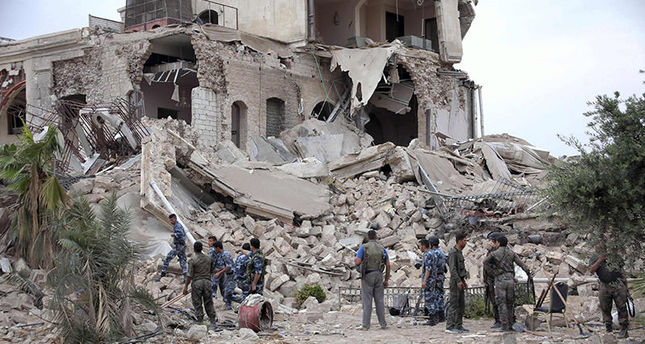 by Anadolu Agency
Jan 31, 2015 12:00 am
Turkish foreign minister held a meeting with the UN aid chief in Ethiopia on Friday about the ongoing humanitarian crisis in Syria.

According to Turkish diplomatic sources, Mevlüt Çavuşoğlu said the Assad regime has started to attack Aleppo in Syria and self-proclaimed Islamic State of Iraq and Sham (ISIS) militants were attacking Kirkuk in Iraq after being defeated and forced out of the Syrian town of Kobani.

He made his comments during his meeting with Valerie Amos, the UN undersecretary general for Humanitarian Affairs and Emergency Relief Coordinator.

After months of violent clashes, Kobani was liberated from ISIS fighters, but the northern Syrian town is now in ruins.

Military factions and militias in Kobani said they killed 3,710 ISIL militants since clashes began more than four months ago, while 425 opposition fighters were killed in the fighting, according to officials.

Sources also quoted Çavuşoğlu as saying that Syria needed reconstruction and a comprehensive strategy to resolve the crisis.

De Mistura is the UN special envoy for Syria and commented on Syria on Thursday as Russia prepared to host a meeting between Syria's two warring sides from Jan. 26 to 29.

The meeting comes after the second round of Geneva talks in 2014 failed to end a conflict that has claimed 220,000 lives.

"Syria has gone 40 years backwards from where it was and it may need the same amount of time to restore the country unless a political solution is reached urgently," de Mistura said.

Turkey's foreign minister was in Ethiopia's capital Addis Ababa for the 24th African Union summit, which was titled "Year of Women's Empowerment and Development towards Africa's Agenda 2063."

The meeting was about regional and international developments, as well as cooperation on energy and arranging joint economic meetings between Turkey and Niger, diplomatic sources said.

Turkey's foreign minister was then received by Ethiopian President Mulatu Teshome Wirtu and the president of the Union of Comoros, Ikililou Dhoinine.

Çavuşoğlu and Wirtu discussed opportunities to boost the trade volume between the two countries and the opening of a Yunus Emre Cultural Center office in Ethiopia.

Wirtu said there should be more mutual visits and that it is important for Ethiopia to benefit from Turkish investors' experiences.

During his meeting with Dhoinine, Çavuşoğlu talked about the Turkish Cooperation and Coordination Agency's (TİKA) assistance in building an Olympic stadium on Anjouan Island and sending 26 tons of medicines to El Maruf Hospital in Moroni, Comoros.